The 10 most important nutrition stories of the last two decades

America's relationship to food and health has certainly changed in the 20 years since Cooking Light debuted. Some of those changes may seem discouraging: Rates of obesity and diabetes have risen, food-borne illnesses frequently make headlines, and more people eat meals -- often fast food -- away from home than ever before. 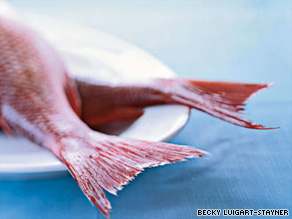 Studies suggest that fish, rich in omega-3 fatty acids, is good for your heart, brain, joints, and possibly your mood.

Look more closely, though, and you'll see that the last two decades also have brought many innovations that make eating healthfully easier than ever. The 10 stories outlined here grabbed headlines for a reason. They document the tools available to help all of us make smarter food choices. And that implies hope for a more healthful future.

When the U.S. Department of Agriculture decided to design an icon of good nutrition, it considered a variety of shapes and finally settled on the Food Guide Pyramid in 1992. This was a departure from the four food groups (grains, meats, dairy, and fruits and vegetables) that had guided the public's eating habits for nearly half a century.

By the time the USDA announced plans to revamp it in 2003, some 80 percent of Americans recognized the pyramid. In 2005, the USDA unveiled a renovated pyramid, shortly after publication of the 2005 Dietary Guidelines, on which it is based. Like the guidelines, the new pyramid advises Americans to eat more fruits and vegetables, consume three servings of low-fat dairy and three or more ounces of whole grains daily, and moderate intake of healthful fats, such as those found in olive oil, nuts, and avocados. CookingLight.com: Fluid-Rich Foods

A staircase reminds users to stay active. There's one more big change: The new food pyramid is Web-based, allowing users to tailor it to their individual needs based on age, sex, height, weight, and activity level at mypyramid.gov.

Knowing the calorie content of your favorite packaged foods used to be a guessing game. That changed in 1994 when the Food and Drug Administration required products to carry nutrition facts labels that listed the amount of calories, calories from fat, total and saturated fat, protein, carbohydrates, fiber, sugar, cholesterol, sodium, vitamins A and C, calcium, and iron per serving.

Trans fat is the label's newest addition. Since the FDA began requiring food manufacturers to list this unhealthy fat in 2006, a number of products, from snack foods to margarine to frozen meals, have been reformulated to eliminate it. And many food companies have also begun to include additional information voluntarily, from potassium, a mineral key to blood pressure control, to heart-healthy fats, such as mono- and polyunsaturated.

Fifty-one percent of adults take advantage of the information nutrition labels provide, according to the Cooking Light 2007 Insight survey (up from 43 percent in our 2003 survey). Reading labels not only reflects an interest in healthier eating, but studies show those who read nutrition facts labels are more likely to eat less of foods high in saturated fat than those who don't. CookingLight.com: Fat: Fact or fable?

The American Heart Association and U.S. Dietary Guidelines advise eating seafood twice a week. Rich in omega-3 fatty acids, it's good for your heart, brain, joints, and possibly your mood, as a number of studies suggest.

But what about mercury and other contaminants found in seafood? In 2004, the FDA and the Environmental Protection Agency issued seafood advisories for children under 12, pregnant and nursing women, and women who might become pregnant, suggesting they avoid shark, swordfish, tilefish, and king mackerel. The warning filtered into the general public's consciousness, and almost a third of Americans incorrectly came to believe the advice applied to everyone and extended to all species of fish, according to a survey by the Center for Food, Nutrition, and Agricultural Policy. CookingLight.com: 9 nutrition essentials

Fortunately, the confusion has been cleared. Last year, the Institute of Medicine declared the health benefits of eating seafood outweigh its risks, even for pregnant and nursing women.

Fat is not a four-letter word

For many people, straightening out the facts about fat has been tough. Long demonized -- 20 years ago, many grocery shelves were packed with nonfat and low-fat products -- mono- and polyunsaturated fats are now embraced for their health benefits.

Research has shown that these fats help improve blood cholesterol levels, either by cutting levels of low-density lipoprotein, one of the most damaging forms of cholesterol, or by boosting levels of high density lipoprotein, a protective type of cholesterol. The 2005 Dietary Guidelines made fat's revised role official, advising that a healthy intake could range from 20 percent of daily calories up to as much as 35 percent.

Adding fat to your diet is still best tempered with caution. At nine calories per gram, it contains more than twice the number of calories in protein or carbohydrates. Some types of fat are still to be avoided -- advice that hasn't changed for the past 20 years and isn't likely to change in the future. The AHA, the National Heart Lung and Blood Institute, and the Dietary Guidelines all urge limiting both saturated and trans fats as a result of their roles in promoting heart disease.

Most grocery stores now stock whole-grain pasta, bread, crackers, cereals, and other products that 20 years ago were found almost exclusively in health-food stores. Whole grains boost foods' nutritive value, as they contain complex carbohydrates and fiber, which don't raise blood sugar levels the way foods made with refined grains do.

Until 2006, there was no official government definition of whole grains, which made it difficult for consumers to know that cracked wheat, stone-ground wheat, ordinary wheat flour, multigrain, and many other seemingly whole-grain sounding products were not the real thing.

Now, spotting whole-grain products is easier, thanks to stamps issued by the Whole Grains Council, a nonprofit group developed in 2003 to help identify whole-grain foods. Since then, more than 1,000 products from nearly 100 companies have qualified to use the stamps.

Food for what ails you

In developed countries, high blood pressure is a common problem of aging. But in populations where sodium intake is low, high blood pressure is much less common with age. To see whether food could make a difference, the NHLBI launched the Dietary Approaches to Stop Hypertension Study in 1997. The results proved that just two weeks of eating a diet low in sodium, rich in fruits and vegetables, fiber, whole grains, and modest amounts of healthful fats can significantly lower blood pressure. A follow-up study published in 2001 showed that DASH could help lower blood pressure for everyone, even for those who did not yet have hypertension.

More recently, researchers at the University of Toronto reported that a group of foods, each known to lower blood cholesterol levels, can together cut it as much as some prescription medications. Dubbed the Portfolio Eating Plan, the regimen includes almonds, soy, fiber, and margarine fortified with plant stanols and sterols (found in products such as Take Control or Benecol). Since the FDA approved fortification with these cholesterol-lowering substances in 2000, a growing number of products include them, including orange juice and chocolates.

In 1987, we drank water from faucets, fountains, and coolers. The coffee we sipped was often brewed at home or purchased for about 50 cents a cup. Now most of us drink water from bottles and don't blink at paying $3 or more for a cup of fancy flavored coffee. No wonder beverages have become a major source of calories, accounting for 20 percent of daily intake. CookingLight.com: Nutrients women need most

To help consumers recognize healthier choices, a team of University of North Carolina scientists developed a beverage guidance system in 2006. The leading drink choice to quench thirst is water, followed by such low-calorie choices as tea, milk (nonfat or skim), and diet drinks, then juices and sports drinks.

Alcohol has made intriguing health inroads in the past 20 years. Throughout the 1980s and 1990s, research repeatedly observed that people who consume alcohol in moderation-one drink daily for women, two for men-had lower rates of heart disease.

Variety is the spice of life

Repeated studies have found people who take large doses of single nutrients-vitamin E, beta-carotene, vitamin C-aren't any healthier than people who don't. In some cases, large doses may actually be harmful.

Research also suggests that relying on dietary supplements may not fully cover your nutritional bases. In 2006, a panel convened at the National Institutes of Health concluded there is not enough evidence to recommend for or against taking multivitamins.

Time and again, research points to eating a variety of foods for optimal health -- wonderful news for anyone who enjoys eating. Choose fruits and vegetables in all the colors of the rainbow. Reach for whole grains, beans, and a wide range of lean protein, from a little red meat to seafood. But most of all, take the time to cook -- and savor -- meals that you can share with family and friends.

From 1994 to now, the number of farmers' markets has more than doubled, according to the USDA. The local and seasonal fruits and vegetables such markets sell are the cornerstones of healthful diets.

Many of these markets stake their reputation on selling organic food -- a category that didn't have an official definition until 2002, when the USDA developed guidelines governing the growth, production, and certification of organic foods. Since then, organic food sales have grown by roughly 20 percent each year. Today, certified organic food is so common that it's even sold in large chain groceries, such as Giant, Safeway, Costco, and Wal-Mart.

Although there's little proof that eating organic will make you healthier, it may make your conscience feel better, since evidence indicates organic products can be good for the environment.

All About Diet and Nutrition • Organic Foods • Vitamins and Supplements