Teen who cries blood gets help from experts

(CNN) -- Calvino Inman had just stepped out of the shower one evening in May when a glimpse of his reflection in the mirror caused him to panic. "I looked up and saw myself, and I thought I was going to die," says the 15-year-old from Rockwood, Tennessee. His eyes were streaming tears of blood. 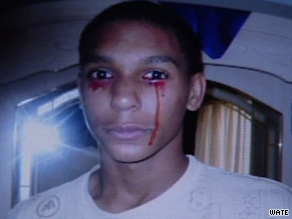 Doctors are still searching for a medical reason for Calvino Inman's tears of blood.

Inman's mother, Tammy Mynatt, says she immediately rushed him to the emergency room, but by the time they arrived, the bleeding had stopped. Doctors couldn't see what the family was trying to explain. They returned home completely perplexed. When the bloody tears returned a few days later while Inman was on a camping trip, he was rushed back to the hospital.

Mynatt hoped that once doctors finally witnessed the phenomenon, there would be answers. But that wasn't the case. "The people at the hospital said they had never seen anything like it," Mynatt recalls. She says her son underwent an MRI, a CT scan and an ultrasound, but none of the tests had abnormal results. "'We don't know how to stop it,'" Mynatt remembers being told by doctors. "It just has to run its course."

Dr. Barrett G. Haik, director of the University of Tennessee's Hamilton Eye Institute, says there is an answer, sort of. He says "crying blood," a condition called haemolacria, is common in people who have experienced extreme trauma or who have recently had a serious head injury. But a case such as Inman's is still a medical mystery. "What's really rare is to have a child like this," Haik says. "Only once every several years do you see someone with no obvious cause."

Watch more on the teen who cried blood »

Haik and a team of researchers published a 2004 study in the Journal of the American Society of Ophthalmic Plastic and Reconstructive Surgery looking specifically at children who developed unexplained, spontaneous episodes of bloody tears between February 1992 and January 2003. Only four cases were recorded.

Because of the rarity of the condition, experts anticipate Inman will have multiple tests from a variety of specialists, including hematologists (blood specialists), ophthalmologists (eye specialists) and otolaryngologists (ear, nose and throat specialists).

Dr. James C. Flemming, also an ophthalmologist at the Hamilton Eye Institute, has been in touch with Mynatt and her son. He is reviewing Inman's medical records for possible treatment.

Flemming says complications to look for include blood clots, a growth or tumor near the eye, or even a simple infection. He also says the culprit could be something so tiny that none of the standard tests would pick it up. "It's a very hard thing to estimate," Flemming says. "You may have to watch expectedly for other symptoms to show up."

Inman's analysis would also include a psychological evaluation to rule out the possibility that the bloody tears were faked. "When you can't find an origin, you can't eliminate any of the possibilities" Haik explains. He says there have been cases where children seeking attention have found creative ways to simulate haemolacriatic symptoms.

Still, Mynatt and her son are relieved to at least have more guidance. In an interview with CNN affiliate WATE, Mynatt was near tears herself explaining her frustration: "I just truly want somebody to say they've seen this and they can help us."

And that's at least one reassurance Flemming and his team of experts at the Hamilton Eye Institute can offer. "We get more positive talk now than negative. It really feels like there's hope," Mynatt says, relieved.

But still, the possibility remains that after endless tests, the underlying cause may never be found. In all four cases Haik examined previously, the bleeding stopped on its own.

"As physicians, that's disconcerting, because we like to have the answers," Haik admits. Moreover, he says he knows from previous experience that the toll of not knowing is much worse for patients. "I could always see the fear in their faces because no matter what we studied, we couldn't find an answer."