(CNN) -- It was still dark when Stan Brock began calling out numbers on his megaphone to admit a crowd of hundreds gathered at a Los Angeles sports arena Tuesday morning. 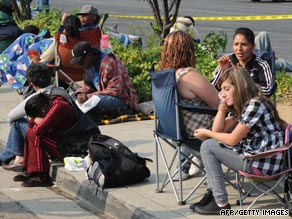 A mobile health clinic offering free services has drawn thousands of people in Los Angeles in the last week.

Over the last week, thousands seeking free medical care have turned up at the mobile health care clinic set up by Remote Area Medical, a non-profit organization founded by Brock.

Tuesday marks the final day of its eight-day operation in Los Angeles, which so far has resulted in the provision of at least $2 million in free health care services, according to Brock's early estimates.

Remote Area Medical, better known as RAM, is a volunteer organization that brings free medical, dental and vision care to people around the world.

Since its launch in 1985, RAM has sent expeditions to developing corners of the world, including Haiti, the Dominican Republic and India.

But in recent years, the Knoxville, Tenn.-based organization has faced increasing demand for its services in the U.S., including from large urban areas.

"We've had to cut back on services to needy places like Haiti because of overwhelming need in the U.S.," Brock told CNN. "We have to take care of the home front first."

On the final day of the Los Angeles operation, Brock said crowds were still gathering with the hope of receiving care. Patients have spent hours waiting in line in the past week for the chance to get free care.

RAM has had to turn away some patients because it didn't have enough volunteers to provide treatment. It hasn't reached its target of treating 1,500 patients a day, but Brock still considers the operation a success.

He said RAM has treated at least 4,557 people, and that doesn't include figures from the last two days of the operation, which aren't available yet, he said.

Many patients have used more than one service, resulting in roughly 11,500 patient encounters. That includes the extraction of nearly 1,800 bad teeth and the production of 1,090 pairs of new eyeglasses.

While limited access to health care is often associated with developing countries, it's a problem that faces patients around the world. That's become increasingly clear as America debates the future of health care.

Los Angeles is by far the largest urban community RAM has served so far. The organization has been besieged for requests from a number of metro areas, including Detroit, Seattle, Miami and Atlanta, Brock said.

The lack of accessible health care from an economic standpoint is a problem that has been going on for decades, Brock said.

"We could have come to Los Angeles 15 years ago and I guarantee there would have been just as big of a turnout of patients," he told CNN.

Brock started RAM after spending 15 years in what used to be British Guiana -- now known as Guyana -- in South America.

In that isolated area, it would take 26 days on foot to reach care, Brock recalled, and he wanted to find a way to bring medical care to such remote areas.

RAM usually provides services in the Appalachia region of the U.S. where it's easier for volunteers to work, Brock said. Medical practitioners providing free care in Tennessee can be licensed in any state.

Unfortunately, he said, other states don't have similar provisions, making it difficult for RAM to recruit enough local volunteers to be able to deal with the demand if they were to set up in areas like New York or Washington.

Running the temporary clinic is practically a 24-hour operation. Brock's day starts at 4 a.m. and runs well into the night.

But it's a rewarding experience for volunteers when they get to see how much their efforts have been appreciated, he said.

"When you see a patient who has had thousands of dollars of free dental care come out of a dental chair and they've got tears in their eyes and hug the dentist and dental assistant, it makes it all worthwhile."