LONDON, England (CNN) -- Pharmacies in England are reporting a run on supplies like surgical masks, thermometers and anti-bacterial gels by customers concerned about swine flu amid a surge in the number of people infected by the virus. 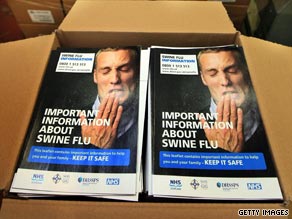 A box of leaflets containing information about swine flu, distributed by the UK's Department of Health.

In some cases, drug stores in England say they are out of the items and may not get more in for weeks or months.

"People are very panicked," said a pharmacy assistant at Zafash Pharmacy in southwest London. "That's why everyone is running for thermometers, surgical masks, and anti-bacterial gels."

The UK's Department of Health estimated this week that there were around 100,000 new cases of swine flu in England in the week ending July 17 -- nearly double the number of cases for the previous seven days.

The UK has been hit hard by the H1N1 virus, with only the U.S. and Mexico recording more cases of infection, according to World Health Organization figures earlier this month.

The World Health Organization has stopped giving a global tally of cases but said Friday that swine flu has now spread to more than 160 areas and territories in the world.

At least 26 people have died of the disease and this week the British government set up a national flu hot line and Web site to allow those suspected of having swine flu to get a prescription for antiviral medication over the phone.

Those who are given prescriptions must pick up the medication at designated collection points in their area.

But at Hodgetts Chemist in north London, a supply of surgical masks that normally lasts for half a year has gone in three days, said pharmacy assistant Sylwia Sznyk.

Sznyk displayed a receipt from the chemist's suppliers that showed three types of digital thermometers that were out of stock. The pharmacy is now out of thermometers.

"One of the manufacturers, he said the next thermometers they will have is in October, so now there is no chance to get them from this particular supplier," she told CNN.

The supplier is also out of stock of three different types of anti-bacterial gel, she said, even though the gel is ineffective against viruses.

Central Pharmacy in Ashington, in northern England, is also out of thermometers, pharmacist Nadeem Shah told CNN. He said he believes most shops and pharmacies in the area are also out.

"There's no thermometers at all, which is worrying because it's just a sign that it's going to impact on other supplies as well linked to people generally not feeling well -- in particular paracetamol (acetaminophen), ibuprofen, and other medications," Shah said.

The pharmacy was out of stock of anti-bacterial gels last month, but manufacturers are making more so it's back on the shelf, he said. However, it's being sold for nearly double the price, he said.

"They're pennies otherwise to buy, but very quickly some manufacturers have got into the market of producing gels and their prices are quite high," Shah said.

At their sister pharmacy in nearby Morpeth, any anti-bacterial products at the checkout counter are "gone in a day, rather than in a month," he said.

"Some of the gels don't do anything different to your soap at home," he said, emphasizing that good hygiene, good handwashing, and disposable tissues are the best way to ward off viral infection.

"There's definitely some kind of misunderstanding -- people are thinking that having those type of products will give them a bit more confidence. But it's their choice, obviously."

Though Central Pharmacy does not normally sell surgical masks, they considered stocking some when the virus broke out a few months ago, Shah said. They decided against it so as not to stoke panic.

"It could be seen as a sign of endorsement rather than asking people to get advice," he said. "It would just give a very visible panic message."

Croydon Pharmacy, south of London, still has stocks of thermometers despite higher demand, but it has run out of surgical masks, said pharmacist Michael Hammond. He said the pharmacy has noticed a rise in people asking questions and wanting information about swine flu.

"I think the reaction has been in response to what they've heard on the news," Hammond said. "And even where it is not a true case of the patient suffering, they still want more information. But I think generally we've been able to give them what they need."

A branch of the Boots pharmacy chain in Fulham, southwest London, has been out of thermometers for two weeks, said employee Wilson Le. They're also running out of anti-bacterial gels; the store doesn't stock surgical masks.

While it is not running out yet, one pharmacy in the eastern English city of Norwich said it is noticing an increase in demand for masks, thermometers, and anti-bacterial items.

"It's not completely a foregone situation where I can't get hold of it, but it's becoming difficult," said the pharmacist, who asked not to be identified because his pharmacy is one of the government's distribution points for the antiviral medication Tamiflu, and he didn't want to spark concern.

The pharmacist said he was doling out Tamiflu to 70 to 80 people a day and described the lack of supplies as worrying.

The pharmacist complained that the paperwork he is required to fill out for each patient takes him five minutes per person, giving him less time to spend consulting with other customers.

"I wish somebody would have organized it a little bit better," the pharmacist said.

Shah, of Central Pharmacy, said the run on supplies makes him worry that they won't be available later in the year, when flu season kicks in.

"Manufacturers would have made their plans for winter a while ago, but if we're consuming these products early, in August and July, I don't know if those manufacturing plans are in place yet," he said.

The government advises anyone suspected of having swine flu to send a friend or relative -- a "flu friend" -- to their pharmacy to pick up the medicine for them. But that advice isn't being followed by everyone.

"Some patients come in directly rather than ask their friend to come," said Le, of Boots pharmacy in Fulham. He said one dispenser has come down with swine flu after being infected by a sick customer.