As nation gains, 'overweight' is relative

(CNN) -- The little number on the tag on a pair of pants that indicates size can mean a lot to a person, and retailers know it. 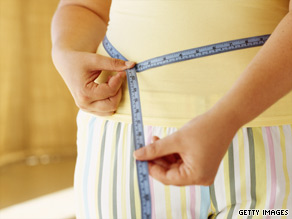 The probability of people describing themselves as overweight is decreasing, researchers find.

That's why, in recent years, as the American population has become generally more overweight, brands from the luxury names to the mass retail chains have scaled down the size labels on their clothing.

"You may actually be a size 14 and, according to whatever particular store you're in, you come out a size 10," said Natalie Nixon, associate professor of fashion industry management at Philadelphia University. "It's definitely to make the consumer feel good."

Research shows that, when it comes to self-perception, the concept of "overweight" may be relative.

A working paper from a group led by Mary Burke, senior economist at the Federal Reserve Bank of Boston, Massachusetts, suggested that people's perceptions of overweight have shifted, and "normal" is now heavier than it used to be.

Researchers used data from the National Health and Nutrition Examination Surveys, nationally representative surveys run by the Centers for Disease Control and Prevention. The first group was surveyed in 1988-1994, and the second was surveyed in 1999-2004. Because there were different people in each survey, it is not possible to tell if the perceptions of individuals shifted over time, the authors said.

Participants were asked whether they consider themselves "underweight," "about right," or "overweight," and reported their body mass index, a measure of the health risks associated with weight.

Although the BMI of the general population increased from the earlier survey period to the later one, the probability of people describing themselves as overweight decreased in the later survey, researchers found.

They found that weight misperception tended to decrease among women -- meaning women with normal BMI who were surveyed in 1999-2004 were less likely to say that they're "overweight" than women with normal BMI in 1988-1994, especially among 17 to 19-year-olds. For men, it was about the same.

"For women, this was good news," Burke said. "Women seem to get a more realistic perception of themselves."

Although the study authors said this trend may reflect healthy body image campaigns, physician nutrition specialist Dr. Melina Jampolis, who was not involved in this research, said she doubts that positive messages had this much influence.

Rather, it is the relative increase in weight of the general population that makes people with normal BMI feel more normal, she said.

On the flip side, feeling normal but being overweight may decrease a person's motivation to lose weight, Burke said.

Still, while the BMI scale reflects disease risks associated with being overweight, it does not reflect the whole story of a person's health, experts said.

There have been reports that being somewhat overweight, but not obese, is associated with decreased mortality, such as a 2005 study in the Journal of the American Medical Association that looked at deaths from a variety of causes.

Innovations such as treatments for high cholesterol have lowered the death risks for overweight people, Burke said. Especially for older adults, being slightly overweight may increase bone density, cushioning bones against falls, she said.

But the JAMA paper shows associations, not causes. People should not take this information as an excuse to gain weight, Jampolis said.

There are, however, other reasons that BMI isn't the whole story -- for instance, it does not reflect the distribution of a person's weight, Jampolis said.

"You could have really skinny arms and legs and just carry your weight in the middle, and it could be only 10 pounds, but belly fat, the visceral adiposity, it could very significantly increase your risk of disease," she said.

Experts noted that plumpness has been in style during some historical periods, especially as an indicator of prosperity when food was scarce. But the ideal of controlling one's food isn't new either. The book "Fat History: Bodies and Beauty in the Modern West" by historian Peter Stearns points out that fasting was a religious virtue seen throughout the Middle Ages, and continuing into the Puritan version of Protestantism. Christianity also espoused the idea of restricting food to fight sin.

The artistic and literary movement known as Romanticism, beginning in the late 18th century, stressed "slender, ethereal" ideals, Stearns wrote. The 1830s brought a prominent New York fashion style of a "willowy" look for young women, and there were many reports of anorexia nervosa during this time, the book said. But for older women, plumpness remained fashionable, and women on stage were expected to be voluptuous.

The meaning of the word "diet" came to include the goal of weight loss as early as 1910, Stearns wrote. "Middle-class America began its ongoing battle against body fat" between 1890 and 1910, Stearns wrote. The main factors that contributed to this shift were the advent of fat-control devices, the rise of public conversation about fat, and changes in fashion for both men and women, he wrote.

The culture of beauty that shaped up around the turn of the last century, promoting slimness as beautiful and fatness as ugly, has intensified since then, Stearns wrote.

Despite the widespread notion of dieting, obesity has risen dramatically over the last 20 years in America, according to the Centers for Disease Control and Prevention. A recent survey by the Robert Wood Johnson Foundation and the Trust for America's Health found that the percentage of adults classified as obese went up in 23 states in the last year.

View a map of obesity in America »

As clothing size numbers scale down in an era when bodies are getting more overweight, portion sizes have been increasing, Jampolis said. Photographs of fast food hamburgers from 50 years ago reveal that the serving size back then would seem like a "joke portion," now, she said.

"The same thing has happened with our body sizes. We're perceiving them as totally normal," she said.

As far as vanity sizing, Nixon called it a "temporary fix" that reflects a larger problem of people looking for quick solutions for losing weight, she said.

"It doesn't really deal with the root of the problem," she said. "It's really a lifestyle issue. It's not about a temporary diet, it's not about being pleasantly surprised because you're a size 12 instead of a size 16," she said.