ALBANY, Georgia (CNN) -- Pamela Green-Jackson didn't learn until after her brother's funeral that doctors had warned him his weight could cost him his life. 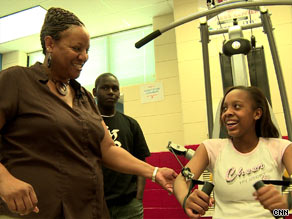 "He didn't have to die," said Green-Jackson. "I promised myself that I would do whatever I could to make sure another child didn't suffer like he did."

Turning her pain into action, Green-Jackson quit her job and procured $30,000 in grants to build a fitness center in a local middle school.

Today, Youth Becoming Healthy (YBH) has facilities in six middle schools and one elementary school in Albany and provides free fitness and nutrition education to about 350 students a year.

Youths work one-on-one after school with personal trainers and nutritionists who help them get on the right track. To keep young people engaged and fit, YBH offers classes such as martial arts, hip-hop dance and a walking club. Green-Jackson says her group allows the children to set their own goals.

"If we instill these habits in them early, they will grow up to become healthier adults," said Green-Jackson, 43. "That's what this is really all about -- saving the lives of children." Do you know a hero? Nominations are open at CNN.com/Heroes.

Since 2004, YBH has helped about 4,000 youth lose thousands of pounds. Green-Jackson also successfully campaigned to have schools provide healthier options in their cafeterias and vending machines.

Jasmine Warren has reaped the benefits of Green-Jackson's efforts. Warren said that by age 11, she had high blood pressure, a heart murmur and problems with her cholesterol.

Warren, now 15, has lost 37 pounds. She credits her brighter future to the program.

"Pamela saved me from going to an early grave," said Warren.

"One in three children in this community is affected by childhood obesity because of poverty, lack of education and access to resources," said Green-Jackson, adding that dangerous neighborhoods are also a major obstacle.

"Kids don't go out and play as much anymore because of the gangs and the crime. It is unsafe."

Georgia has the third-highest rate of obese and overweight youths in the nation, with 37.3 percent of its children falling into those categories, according to a recent report from the Trust for America's Health and the Robert Wood Johnson Foundation. (Mississippi and Arkansas rank one and two, respectively.)

This summer, the group is offering camp for students with high-risk health issues, such as heart problems, kidney disease, high blood pressure and high cholesterol.

"A number of kids have [these issues]. That is unheard of," said Green-Jackson. "These children are [given] prognoses that they won't live to 21 years old. That is something we are trying to correct through this program."

At nearly 400 pounds, every day is a struggle for 13-year-old Malik Thomas.

"It's not easy carrying around all of this weight. I wanted to get healthy and fit," said Thomas, one of 25 children enrolled in YBH's summer program.

Green-Jackson's program is giving Thomas hope for a healthier future. He's beginning to lose weight, and his endurance has improved.

"Miss Pamela is my hero, because she's helping me do things that I never thought I can do," he said. "It feels great."

Green-Jackson believes the program will help Thomas by introducing him to other young people who share his health problems.

"They motivate each other," she said. "This program is encouraging him to continue beyond the summer."

YBH is mostly funded through donations, but Green-Jackson also spends a large amount of her own savings each year to keep the program running. She says she refuses to rest until the children's healthy futures are secured.

"I want to have YBH in every school in the nation."

Want to get involved? Check out Youth Becoming Healthy and see how to help.

All About Obesity • Diet and Nutrition • Exercise and Fitness