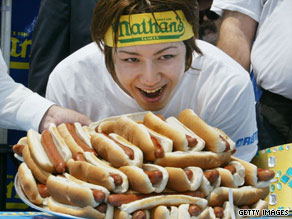 Takeru Kobayashi has enthralled and puzzled audiences for years at the annual Nathan's hot dog-eating contest.

Dominick Cardo, known as "The Doginator" in competitions, woke up at night sweating, nauseated and feeling stomach and chest pains.

"Any way you look at it, it's not healthy," Dave "Coondog" O'Karma, a retired competitive eater, said of his former hobby. "You do it once in a while, and it's fun. I don't think loading your body with fat and salt is healthy."

After 35 years of gobbling hamburger, oysters, eggs, corn on the cob and even bull testicles, O'Karma listened to his family and retired from the competition.

Despite having quit for health reasons, ex-speed eaters fondly recall the thrill of competing, cramming food down their throats and basking in the cheers.

"I'm probably a hypocrite," said O'Karma, who directs the Association of Independent Competitive Eaters. "There's a sixth-grader in me who loves a good hot dog contest."

The toll of competitive eating on the body has not been researched, and it appears unlikely that such a study will take place, since it is a small, specialized population.

In 2007, four University of Pennsylvania School of Medicine doctors who specialize in gastroenterology and radiology conducted an experiment on the stomach activities of a competitive eater and an average eater.

Janus, a trim 29-year-old at the time, insisted that he did not feel full. Through training and competing, he no longer felt full regardless of how much he ate. His stomach did not have muscle contractions called peristalsis, which move the food down the digestive tract.

Instead, the hot dogs sat in his stomach and "protruded enough to create the distinct impression of a developing intrauterine pregnancy," the doctors wrote.

One sample is not conclusive, lead author Marc S. Levine said. He speculated that over time, the stomach might lose its ability to deflate, which could cause nausea and vomiting.

Lack of stomach activity, like Janus', has been seen in extreme cases where people suffer stomach obstruction, said Levine, a professor and chief of gastrointestinal radiology at the University of Pennsylvania Medical Center.

Stomachs stop contracting and swell when there is scarring, ulcer disease or a tumor causing obstruction.

"Patients who have terrible gastroparesis -- that's when the stomach doesn't contract -- those are patients who usually have diabetes or are on high doses of narcotics over a long period of time," Levine said.

Janus told the doctors that his stomach would deflate several days after the competition. During that time, he did not eat.

In an opinion piece published in the American Journal of Radiology, the doctors warned of possible "morbid obesity, profound gastroparesis, intractable nausea and vomiting, and even the need for a gastrectomy [surgical removal of all or part of the stomach]. Despite its growing popularity, competitive speed eating is a potentially self-destructive form of behavior."

During 35 years of competitive eating, O'Karma disregarded the medical advice.

"When I was having fun, I didn't care," he said. "It was worth that discomfort to get what I wanted. It was fun -- not the eating so much, but the trips, getting to see all kinds of places and different people. I'm a house painter in real life. How else could I ever get the opportunity like that? For an average dopey guy, I kind of went a long way with something stupid."

Despite health warnings about obesity, the faces of competitive eating are not overweight.

Takeru Kobayashi of Nagano, Japan, is a slender man who snaps the hot dogs in half and gobbles the bits robotically. For years, Kobayashi and world record holder Joey Chestnut of San Jose, California, have vied for the top prize in the annual hot dog contest at Coney Island, New York.

"The new generation of eaters is interested in weight-lifting, running," said Jason Fagone, who followed competitive eaters for a year for his book "Horseman of the Esophagus." "They have more athletic body types than the old generation."

The younger, fitter speed eaters justify the health risks by likening them to running marathons. Their reasoning: Activities like football and running are stressful to the body, but an occasional game, marathon or speed-eating contest will be ok, Fagone said.

Injuries could occur, such as vomiting, stomach pain and choking. In October, newspapers in Taiwan reported that a 23-year-old student choked to death in a steamed-bun-eating contest. The prize was $60.

"It tends to attract an intense sort of person, the person willing to ignore the best health advice," he said.

Lerman retired from competitive eating because he couldn't keep up with the younger eaters. Since retiring three years ago, the 66-year-old is trying to shed the extra 100 pounds he gained, which he attributes partly to a foot injury that kept him inactive.

In his prime, he wolfed down 120 jalapeño peppers and six pounds of baked beans and loved every bite and his time in the spotlight.

"When you're up on stage and they announce your name, and you get your picture with Mayor Giuliani or Mayor Bloomberg, it's like a high. It makes you feel so good inside," he said. Down in the gut, the Levittown, New York, resident said, "You're really bloated."

Former contestant Cardo knew that his love of eating wasn't healthy. But he continued to train and ate 3 pounds of beef tongue in one contest. As he ballooned to 400 pounds, he realized he wasn't getting better in eating contests. He often felt tired and out of breath.

"During competitions, you get to a point you can't go anymore," Cardo said. "I didn't want to continue abusing my body."

He had an inflammatory disease called sarcoidosis. His arteries were halfway clogged, triggering chest pains. His stomach ached, and his doctor warned him to stop. Cardo finally listened and retired in 2006. After a gastric bypass surgery, Cardo is half his former size, at 205 pounds.

To fill the need to compete, he bowls and plays poker instead.

Cardo plans to tune in to the hot dog eating contest on TV.

"I'm going to watch the contest on Saturday, because I used to do it, and I enjoyed it," he said. "Between that and living longer and having a healthier life, I'd rather do what I'm doing now."

All About Healthy Eating • Competitive Eating