LONDON, England (CNN) -- When people think of coffee, words such as caffeine, aroma and energy may spring to mind. 'Good breath,' however, certainly isn't one of them. 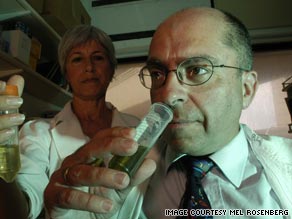 Mel Rosenberg at work in his 'smell laboratory' found that coffee can lead to good breath.

So researchers at Tel Aviv University in Israel, were in for a surprise when their study into the relation between coffee and bad breath, showed that coffee can actually lead to good breath.

Breath specialist Mel Rosenberg of the university's Faculty of Medicine found that there are certain components in coffee that inhibit the bacteria that lead to bad breath -- preventing these bacteria from making their presence felt, or smelt.

"Everybody thinks that coffee causes bad breath," Rosenberg told CNN "and as a latte drinker, I believe that too."

But the malodor doesn't necessarily come from the coffee itself, said Rosenberg: "We think that coffee, which has a dehydrating effect on the mouth, can ferment into bad breath when mixed with substances such as milk."

This meant that until recently, coffee was up there with not eating a healthy breakfast, not drinking enough water and consuming alcohol as causes for unpleasant mouth odors.

But until Rosenberg's study, no one had ever scientifically shown the link between the consumption of coffee and bad breath.

Rosenberg's team wanted to prove just that. They did the research by taking saliva and incubating it with different brands of coffee including the Israeli brand Elite coffee, Landwer Turkish coffee, and Taster's Choice.

"We thought this coffee and saliva mixture would have a terrible odor, but incredibly it had the opposite effect."

Rosenberg -- who also created popular mouthwash Dentyl pH -- is now thinking about creating a mouthwash, toothpaste, or chewing gum based on coffee.

The effects could be similar to plant extracts such as clove oil, which have also been shown to have anti-bacterial properties that prevent bad breath.

But first Rosenberg would have to find which of the hundreds of components in coffee are the ones that have these beneficial properties. "That will take a long time" said Rosenberg.

"But this research has already been a lesson in humility, showing that assumptions are not always correct." Rosenberg -- who also writes children's books such as 'Mel the Smell Dragon' -- told CNN.

"And sometimes, getting it wrong can create even more interesting outcomes."

All About Coffee • Dental and Oral Health