This story was originally published on Health.com on September 23, 2008. CNNhealth is republishing it today because of interest in cardiac arrest after the death of Michael Jackson.

It always seems so straightforward on TV. You have a cardiac arrest, a handsome doctor rushes to your side, shouts "Clear!" and gives you a couple of zaps to the chest with electricity-generating paddles, and -- ta-da! -- you're back in business. Cue the tears and music. 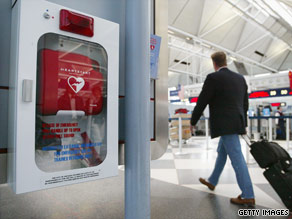 Automated external defibrillators can help a bystander shock a heart in cardiac arrest back into a normal rhythm.

But in reality, a cardiac arrest is a much more complicated business, and one with considerably more peril than you might realize. One study shows that the chances of surviving a cardiac arrest outside a hospital are slim indeed -- around 1 in 22 (about 1 in 12 if someone tries resuscitation).

However, your chances are also better in some cities than others, according to the study, published in the Journal of the American Medical Association.

In fact, if you have to pick a city to have a cardiac arrest in, I'd say Seattle is probably your best bet. For example, 16 percent of people who were treated in Seattle for a cardiac arrest outside of a hospital survived, compared with 3 percent in Alabama.

And nearly 40 percent of those with ventricular fibrillation -- a condition in which the heart quivers with uncoordinated contractions but hasn't completely stopped -- survived in Seattle, compared with about 8 percent of those in Alabama. Health.com: 9 secrets to a healthier heart

The researchers are still trying to track down the reasons why some cities have better survival rates than others. However, a variety of factors play a role, including:

A cardiac arrest is not a heart attack

To be clear, we're talking about conditions in which the heart stops beating and requires a shock to get restarted.

We're not talking about heart attacks, in which the heart is still beating and people are (usually) in a world of pain due to a blocked blood vessel. A heart attack, however, could become a cardiac arrest if you don't get help soon enough. It's not that common, though.

Learn more about the difference between cardiac arrest, heart attack and stroke »

Cardiac arrest is the loss of mechanical activity of the heart that often begins as ventricular fibrillation. It can be caused by previous heart damage, drowning, electric shock, or other reasons. Health.com: 10 best foods for your heart

"Some cardiac arrests are associated with heart attacks, but many are not," says study author Graham Nichol, M.D., of the University of Washington-Harborview Center for Pre-Hospital Emergency Care in Seattle. "Despite what you see on television, many patients who have cardiac arrest do not survive to return home."

The researchers did find that certain regions tended to have more cardiac arrests in general -- for example, Dallas, Texas, had more than double the incidence of Vancouver. (The study did not include every single city in North America, but rather, eight U.S. and two Canadian regions, reflecting about 10 percent of the population, or 21 million people.) Health.com: An illustrated guide to heart failure

But still, cardiac arrest survival rates were higher in some regions than others.

So why the city-to-city difference in survival?

The researchers found a five-fold difference in an area's survival rates after emergency workers treated the patients -- suggesting that cardiac arrest treatment could be improved in some areas.

"Our study suggests that cardiac arrest is a treatable condition," says Nichol.

People are also more likely to survive if a bystander starts CPR or uses an automated external defibrillator, the heart-shocking devices available in malls, airports, and other locations. Health.com: What it's like to have an implantable defibrillator

In the study, bystanders attempted to perform CPR prior to the arrival of ambulance workers only 31 percent of the time.

Nichol recommends that bystanders "recognize and respond quickly by providing CPR, applying a defibrillator to the chest if one is available, and calling 911 so that paramedics will arrive quickly and continue care."

If an individual is sitting up, is awake, and is complaining of chest pain, it's not a cardiac arrest. Health.com: Tricks to lower blood pressure

However, if someone collapses suddenly, and is unconscious and not breathing, it's more likely to be a cardiac arrest. (Learn how to perform CPR on an adult or child, or how to use an automated external defibrillator, and where exactly you should place your hands on an adult's or child's chest. You can even do CPR without mouth-to-mouth.)

Cardiac arrest is the third leading cause of death in this country, says Nichol. "Since it is so common, and success in treating cardiac arrest varies so much from city to city, cardiac arrest should be designated a reportable condition."

Reportable conditions are those monitored by the government, which can help researchers find ways to reduce the risk of such conditions. "Every community can monitor and improve its response to cardiac arrest," says Nichol.