WASHINGTON (CNN) -- The Food and Drug Administration on Tuesday warned consumers to stop using certain Zicam nasal cold remedy products, saying they can cause users to lose their sense of smell permanently. 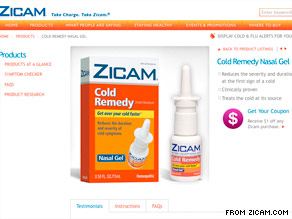 Zicam Cold Remedy Nasal Gel and two other products are the subject of a new FDA warning to consumers.

"Loss of sense of smell is a serious risk for people who use these products for relief from cold symptoms," said Dr. Janet Woodcock, director of the FDA's Center for Drug Evaluation and Research. "We are concerned that consumers may unknowingly use a product that could cause serious harm, and therefore we are advising them not to use these products for any reason."

The popular homeopathic medications are sold over the counter and aimed at reducing the severity and duration of cold symptoms.

The FDA says consumers should stop using the products immediately. The agency has sent Matrixx Initiatives, which makes Zicam, a warning letter telling it the products can no longer be marketed without FDA approval.

A number of lawsuits have already been filed against Matrixx over the products. On its Web site, however, Matrixx says the allegations are "unfounded and misleading."

The FDA says consumers experiencing any loss of smell or taste after using nasal products that contain zinc should contact their physician.

All About Common Cold • Food and Drug Administration