(CNN) -- The worst cholera outbreak in Africa in 15 years has killed more than 4,000 Zimbabweans, and the crisis threatens to worsen when the rainy season hits, the U.N. Children's Fund said Thursday. 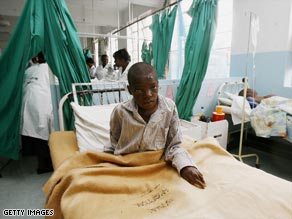 A cholera patient sits in his bed at a hospital in Harare. The rainy season could threaten more lives.

The preventable disease has spread through the southern African country in the past 10 months because of faulty sewage systems, uncollected refuse and a lack of clean water, UNICEF said.

"Last year, we had a near collapse of basic social services," said Tsitsi Singizi, a spokeswoman for the organization.

"Municipal services were not providing clean water anymore and they were not collecting refuse anymore. There was also a collapse of the health-delivery system. So if you went to the clinic and you were affected by cholera, you would not be attended to."

The possibility of a new wave of cholera cases looms, Singizi said.

"We might have another spike in the number of cases once we have our first rain, because cholera is waterborne and the contaminated water will be flowing towards open sources and people will be drinking from unprotected wells," she said.

Nearly 100,000 people have been infected since the current epidemic broke out, according to a new Red Cross report.

The cholera crisis comes as Zimbabwe is struggling with an economic meltdown.

In May, Zimbabwe announced that it would receive a $22 million grant from the World Bank to help the country's battered economy.