(CNN) -- Mothers often get blamed for the way their children turn out, and a new study gives additional weight to that accusation. 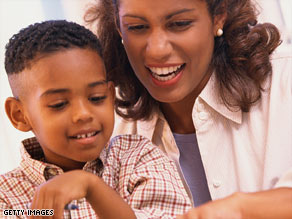 Mothers have opportunities to teach empathy every day, psychologists say.

Research from the United Kingdom shows that the way mothers talk to their children at a young age influences their social skills later in childhood.

In the first part of the study, mothers were asked to talk to their 3-year-old children about a series of pictures depicting scenes such as a child coming out of school looking happy and people waiting in line. Children whose mothers talked about the mental state of characters in the picture tended to perform better on social understanding tasks, the researchers found.

The effect persisted when the researchers revisited the families -- 57 of them remained in the study until the end -- on an almost yearly basis. The authors controlled for socioeconomic status and IQ of the mothers and found that these factors were not as relevant.

"You can predict even from when the children are 3 or 4 what their social understanding will be like when they're 8 or 9," said Nicola Yuill, lead author and senior lecturer in psychology at the University of Sussex in England.

This effect becomes weaker from ages 10 to 12, perhaps because as children get older, they spend less time at home, and their peers and teachers influence them more, she said.

The 12-year-olds, however, generally did as well as their mothers on social understanding tasks, indicating that children at this age can be as "socially sophisticated" as adults, the authors said.

For one test of social understanding, children 8 and older watched clips of the British television series "The Office" and were prompted to answer questions about the situations: for example, the way the main character, David Brent, embarrasses people without realizing it. Children also judged other people's feelings from pictures and explained what they would do in hypothetical situations involving other people's feelings.

"The communication of empathy is just about the most important thing you can do," said Nancy Weisman, a psychologist in Marietta, Georgia, who was not involved with the study. "Every single moment of the day, you have situations in which you can teach this."

Yuill and colleagues are interested in training parents to use these talking skills and seeing what effect that has. For example, they may show videotapes modeling the way mothers communicate "mental state" talk to children.

When they began the study 14 years ago, researchers focused on mothers because it was difficult to find fathers who spent as much time at home with their young children. It may be easier to find fathers to participate today, Yuill said.

Weisman recommends to her patients that they use opportunities such as television shows and movies to talk to children about what the characters may be feeling as a result of the actions on screen. If someone is yelling at the supermarket, this is another chance to talk to a child about other people's feelings, she said.

It's essential for both mothers and fathers to give children a vocabulary of feelings, said Dawn Huebner, a psychologist in Exeter, New Hampshire, who sees children ages 6 to 12. Children don't always realize what their emotions are and need to have words to describe them in order to become more empathetic, she said.

"Let's say a young child grabs a toy away from another young child. It's helpful for parents to say something like, 'That makes him sad when you take it,' " rather than saying 'don't grab' or 'stop it,'" Huebner said.

But social understanding does not guarantee good behavior, the authors said. Children who showed the most sophisticated social skills in this study also behaved the most negatively toward their mothers in the team task of steering a model car around a race track. This suggests that social understanding isn't everything and must be used in beneficial ways, Yuill said.

This negative behavior probably came about because if children feel that they can label their feelings, they're more comfortable expressing a wide range of emotions, said Laurie Zelinger, a licensed psychologist in Cedarhurst, New York, who was not involved with the study.

The finding underscores the need to not only talk about feelings and mental states but to also indicate to children how to deal with those feelings, she said.

All About Preschool Education