Tips for getting insurance when you have a pre-existing condition

(CNN) -- Nineteen-year-old Stuart Wald is not likely to grow out of his schizophrenia, bipolar disease and attention-deficit disorder. But he will, with 100 percent certainty, grow out of the health insurance coverage he has through his father's employer -- and that day is just a few years away. 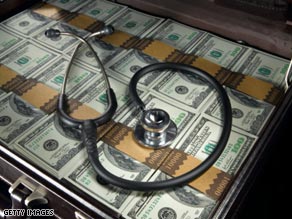 "It's a huge problem, because insurance companies don't want to insure sick people," says one expert.

The Walds (not their real name) know he'll never get insurance on his own because he has not just one but three pre-existing conditions. Without insurance, it will cost the Walds thousands of dollars a month for his treatment and care.

If Stuart could get insurance through his own employer, that would solve the problem. With "group insurance," you can't be denied coverage because of pre-existing conditions. But millions of people can't get insurance through a job for a variety of reasons: They're self-employed, or their employer doesn't offer health insurance, or, like Stuart, they're too sick to work.

That's when they're forced to find insurance on the "individual" market.

Our "Empowered Patient" inbox is filled with desperate pleas from people with pre-existing conditions searching for individual insurance. As a matter of fact, we get more e-mail on this topic than on any other.

Stuart's father, Nathan Wald, wrote to us a few weeks ago.

"He needs lifelong medications and psychiatric therapy," Wald wrote. "Can you give us advice on how he can get benefits?"

According to the Kaiser Family Foundation, 21 percent of people who apply for health insurance on their own get turned down, charged a higher price or offered a plan that excludes coverage for their pre-existing condition.

The health insurance industry doesn't deny that people are rejected or charged higher premiums because of pre-existing conditions.

The industry's trade association, America's Health Insurance Plans, has a proposal to help people with pre-existing conditions as part of a comprehensive health-care reform plan.

But there's a catch: The association says insurance companies could guarantee coverage for people with pre-existing conditions only if all Americans are required to purchase coverage. If that happens, the group says, not only would people with pre-existing conditions be covered, their premiums would not be higher. You can read the complete proposal on the association's Web site.

"We strongly believe that every American, including those with pre-existing medical conditions, should have access to health care coverage," says Robert Zirkelbach, an association spokesman.

Health care reform, of course, is in the air, and in the coming months or years there might be relief for people with pre-existing conditions. This week, President Obama announced a commitment from insurance companies, doctors, hospitals and pharmaceutical companies to lower health care costs as part of an effort to fund insurance for those who don't have it.

Finding individual insurance when you have a pre-existing condition is tough but not impossible.

"We have been successful," said Kevin Lembo, a state health care advocate with the state of Connecticut. "There are options out there."

In about a dozen states, you can be a group all by yourself for insurance purposes. What this means is that you become, in effect, just like any other company, and insurers can't deny you insurance or charge you higher premiums because of your pre-existing condition, according to Lembo.

"You'd be surprised at the number of folks who open their own landscaping business" to get the group of one, he says.

To find out whether your state will allow you to become a group of one, see this list from the Kaiser Family Foundation (look at the column headed "Definition of Small Group," and look for "1-50").

For more information on becoming a group of one, see this advice from the American Diabetes Association.

"You can hire your brother-in-law to become a subcontractor for your landscaping company," Lembo said. "It's horrible, but what else are you going to do?"

An important note: Under these rules, an insurance company might be allowed to exclude coverage for your specific condition for a short period of time, usually about six months.

COBRA can be extremely expensive, but it's worth digging deep in your pockets for the premiums, because it may be difficult, if not impossible, to get insurance any other way, Consumer Reports' Metcalf says. If you've been laid off since September 1, you're eligible for a 65 percent discount on COBRA premiums. For more information, visit the Department of Labor's Web site.

3. When you lose your employer-related insurance, apply for new insurance within 63 days.

In all states, a designated insurance company -- charmingly called "the insurer of last resort" -- has to take "all comers" in insurance lingo. You have to apply for this insurance within 63 days of losing your group insurance. For all the rules, read this explanation from Families USA (scroll down and look for the "HIPAA eligible" heading).

Here's the bad news: Although in some states there are limits to what the "insurer of last resort" can charge you, in other states, there aren't. In those states, "the sky's the limit," Metcalf said. "They can and will charge you a fortune. It could be, say, $1,400 a month in premiums with a $5,000 deductible. But some people pay that because it's the only game in town."

To find out the rules in your state, visit the Kaiser Family Foundation's State Health Facts or contact your state insurance commissioner.

4. Find out whether your state has a high-risk pool.

State high-risk pools are specifically for people with pre-existing conditions who can't find affordable insurance on their own. Thirty states have high-risk pools, insuring 175,000 people, according to the American Diabetes Association, which lists the states on its Web site.

Some professional groups, such as those representing real estate agents and freelance writers, offer health insurance. Check and see whether your profession does the same.

"In those states, everyone has to sell to you," said Cheryl Fish-Parcham, deputy director of health policy at Families USA. Not only do insurance companies have to sell you a policy in those states, there are limits on how much they can charge you, she says.

As for Stuart Wald, his parents are helping him apply for disability. To find out about public assistance programs in your state, see this guide from Families USA.

It's been slow going, but they hope they'll be successful.

"It's kind of like peeling an onion," said Stuart's stepmother, Connie Wald. "Each time you think you are getting somewhere, there's a roadblock. It is very emotionally draining."