'Walking well' flood hospitals with -- or without -- flu symptoms

A runny nose. A cough. A sore throat. And even pork eaten a week ago. 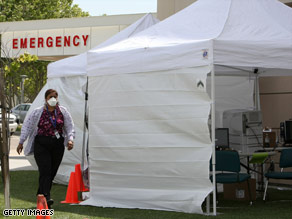 After a week of headlines about the H1N1 virus, or swine flu, many emergency rooms and hospitals are crammed with people, many of whom don't need to be there.

The visits by the "worried well" have triggered concerns of overburdening the nation's hospitals and emergency departments, several health care professionals told CNN.

This week, some hospitals saw record numbers of patients. A few emergency departments shut down to paramedics because of overcrowding.

"We have had a lot of nervous patients with minimal respiratory tract symptoms," said Dr. Mark Bell, principal of Emergent Medical Associates, which operates 18 emergency departments in Southern California. "It has caused signficiant amount of delays in emergency care. They're all walking well."

"I haven't seen such a panic among communities perhaps ever," Bell said. "We are spending significant time in the emergency department, calming people down. Right now, people think if they have a cough or a cold, they're going to die. That's a scary, frightening place to be in. I wish that this hysteria had not occurred and that we had tempered a little bit of our opinions and thoughts and fears in the media. It just went haywire."

In California, triage tents were set outside. Clinics doubled their traffic in major cities like Dallas, Texas, and Chicago, Illinois. In the Los Angeles area, some Emergent Medical Associates locations shut down their paramedic traffic.

"We're closing to the real emergencies that may be befalling our community," said Bell. "There is a little sense of hysteria among the community about the H1N1 virus."

Emergency rooms are usually crowded and "if you increase that volume, you're throwing them right over the edge," said Bill Briggs, president of the Emergency Nurses' Association.

"This has the potential to clog the system and emergency departments already facing serious crowding issues throughout the U.S.," said Briggs, a registered nurse at Tufts Medical Center, in Boston, Massachusetts.

Some came to the hospital because they reported eating pork and having a cough, and thought this meant they had H1N1 virus. Though commonly known as swine flu, this virus is not contracted through eating pork products.

Even in cities that have yet to have a confirmed case of H1N1, health care workers have noticed an uptick in the number of patients. The Minute Clinic, a walk-in health care chain that has 500 offices around the country, saw a 50 percent increase in flu-related visits Thursday.

"It was a lot of 'worried well' people," said Cathleen Shanahan, the nursing director for the emergency department at the hospital. "A lot of parents who were worried they about the flu."

The anxiety is understandable, but Shanahan cautioned, "At some point, they need to realize it's still flu season and it could be a normal flu season, and have nothing to do with [H1N1] flu." CNN.com: Regular flu has killed thousands since January

"The situation is that people get the flu all the time," said Dr. Nick Jouriles, president of the American College of Emergency Physicians. "H1N1 flu is just a bad strain of that. If you have flu symptoms and you ordinarily see the doctor for that, go ahead. If you would not ordinarily go to the doctor, don't."

If a person has no symptoms, then he does not need to seek emergency care, said Jouriles, an emergency room doctor at Akron General Medical Center in Akron, Ohio. And if the person does not have a fever or cough, it is extremely unlikely it's the H1N1 virus.

"Very often when this happens, people naturally become afraid and overinterpret every symptom as a harbinger of the flu or what the epidemic is," said Dr. Jeffrey Steinbauer, professor of family medicine and the medical director of the Baylor Clinic in Houston, Texas. "That's part of providing care to patients and it's kind of expected."

Rather than panicking when you have a cough or runny nose, Steinbauer advised finding more objective measures.

While, the symptoms of the current swine flu and seasonal flu are very similar, reports suggest that this flu virus may result in nausea, vomiting and diarrhea more often than the typical flu. Symptoms include excrutiating body pains, difficulty breathing, significant nasal congestion and high fever. Doctors in Mexico have reported seeing sudden dizziness as well.

Health care workers find themselves trying to balance caution while allaying fears and panic about the virus.

"We recognize this as an infectious disease, this is moving," Dr. Robert Salata, the chief of Infectious Diseases at the University Hospitals Case Medical Center in Cleveland, Ohio. "For the general population, we're trying to calm the fears of people and the worried well, by stressing other elements like cough and sneezing etiquettes, and that you shouldn't go to work if you're feeling sick. If there is a concern, working through this with your physicians would be very important."

But dashing into the emergency department because of a runny nose is not helpful.

"We have a tendency in the U.S. to abuse our emergency departments," Salata said. "If this escalates, you want to use them for people that are not having mild or moderate symptoms."

All About Swine Flu • Influenza