Up to 15 percent of the U.S. population have chronic pain, and as many as five percent have pain so persistent that they need heavy-hitting painkillers, known as opioids, just to get through the day. 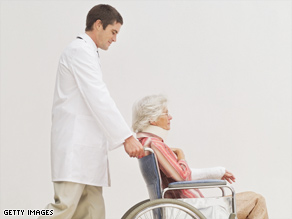 A study says that doctors can help people if they have a "pain team" approach that includes a psychologist.

Now a new study suggests that primary care doctors can do a better job helping people in pain if they have a "pain team" approach that includes patient visits with a psychologist. Pain can stem from a bad back, arthritis, muscle troubles, or other reasons, but medical treatments may be of limited benefit and additional factors -- such as depression -- can make it hard to stick with recommended therapies.

"Pain is a complex phenomenon," said Michael Von Korff, a senior investigator at the Group Health Center for Health Studies, in Seattle, Washington, and an expert on treating chronic pain. "That's why it's so very difficult to treat." Health.com: 5 mistakes pain patients make

In the study, published Tuesday in the Journal of the American Medical Association, Dr. Steven K. Dobscha, of Portland VA Medical Center in Oregon, looked at 401 people with an average age of 61 or 62 who were in pain for at least three months. (They excluded those diagnosed with chronic fatigue syndrome or fibromyalgia.)

Not only did the study subjects have chronic pain due to arthritis, a bad back, or neck or joint pain that had lasted sometimes for years, but they often also had other physical and mental health problems along with a disability, such as depression or post-traumatic stress disorder.

The researchers randomly assigned patients and their primary care doctors to either a collaborative-care group or a standard-care group. In the collaborative-care group, a full-time psychologist and a physician helped manage the patients' care and the primary care doctors participated in two 90-minute pain workshops. Health.com: Moving past the pain: Fibromyalgia patients share their stories

The psychologist talked to patients about their treatment and their goals for care, and the team came up with a treatment plan that was e-mailed to the patient's doctor or posted in an alert in the patient's medical record. People who needed more intensive care -- for example, an additional consultation with a mental health professional -- received it.

Over the course of a year, patients with the pain-treatment team had an average of about 10 or 11 meetings or other contacts with their team members, unlike people with regular care. And it paid off. Those with team treatment had modest but measurable declines in their pain-related disability, and were less depressed too. Health.com: Why fibromyalgia is so hard to diagnose

Treating people in chronic pain is a huge challenge for physicians, said Von Korff. Tests to track down the pain's source, such as high-tech imaging, are costly and of questionable benefit. And once a doctor rules out causes of pain that would require immediate medical treatment, he added, there's not much else he or she can do. Aggressive strategies for pain relief, like surgery, are expensive and risky, and they often don't help.

While opioids can relieve pain, they can also lead to dependence. Other drugs have side effects too; even nonsteroidal anti-inflammatory drugs (NSAIDs), which include ibuprofen and naproxen, can cause gastrointestinal bleeding. "This is an area where more is not necessarily better," said Von Korff. Health.com: Keep pain medication from dulling your sex life

Programs like those in the study can help, simply because they give people advice and encouragement about returning to normal activities, reassurance, and explanations about why they might be having pain, he said. Just encouraging people to engage in activities that they enjoy can help -- and there are no side effects, Von Korff said.

The next step, said Von Korff, would be to see if this approach is even more effective in subgroups of patients, or whether better results can be achieved by beefing up components of the intervention.

All About Pain Management