Attention red wine drinkers: Drinking moderate amounts of any kind of alcohol (including wine, beer, and liquor) is associated with a slightly increased breast cancer risk -- and the rosy-hued beverage is no exception. 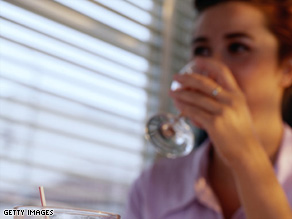 That's the conclusion of a new study that dashes any hope that red wine is less likely than other alcohol-containing drinks to increase breast cancer risk, or that it might even protect against the disease.

"If a woman chooses red wine, she should do so because she likes the flavor, not because she thinks doing so will reduce her breast cancer risk," said Polly A. Newcomb of Fred Hutchinson Cancer Center in Seattle, Washington, who led the research. "It might be good for other things, but it definitely is not conferring any protection against breast cancer."

There's good evidence showing that women who consume alcohol have a slightly greater risk of breast cancer than teetotalers, and the risk is higher with heavier drinking. But research in animals and some human studies had suggested that red wine might not carry the same risks as other forms of alcohol or could even be protective.

This is certainly possible, Newcomb and her team noted in their report in the journal Cancer Epidemiology Biomarkers and Prevention, because red wine contains more potentially beneficial plant chemicals, such as resveratrol, than white wine does.

To find out if this was true, the researchers looked at 6,327 women with breast cancer and 7,558 women who did not have a a cancer diagnosis. Risk rose with the amount of alcohol consumed, no matter whether it was wine, beer or liquor. The heaviest drinkers -- women who reported having 14 or more drinks a week -- were 24 percent more likely to develop breast cancer than nondrinkers. Health.com: For even healthy men, alcohol seems to lower heart attack risk

In comparison, smoking can increase the risk of breast cancer by 32 percent, and having a close relative (mother, sister, or daughter) with the disease is associated with a 200 percent higher risk.

"It really looks as if the pattern is far more important than the beverage," said Dr. Arthur Klatsky, an adjunct investigator with Kaiser Permanente Northern California's research division who has long studied the relationship between alcohol and health. In a large study released in December, Klatsky and his colleagues also found a steady rise in breast cancer risk with alcohol consumption, with no difference in risk between wine, beer, or liquor.

While Klatsky said he thinks having three or four drinks a week seems unlikely to increase breast cancer risk, he added that there also doesn't appear to be any "threshold effect," meaning a minimum level of consumption that's entirely safe.

"The findings from this study do show that alcohol itself is important, and there doesn't seem to be a strong difference between the types of drinks you consume," said Naomi Allen, a cancer epidemiologist at the University of Oxford in the United Kingdom. Allen and her colleagues are following 1.2 million UK women 50 and older participating in the Million Women Study.

This month, they are reporting findings that echo those of Klatsky and Newcomb and their colleagues: moderate to heavy drinking boosted risk of breast cancer, with the same risks seen for women who drank wine and those who drank other types of alcohol.

"The message is pretty simple," Allen said. "Moderate drinking increases breast cancer risk, and it seems that the more you drink the higher the risk."

There are a handful of things women can do to modify breast cancer risk, Newcomb noted, including maintaining a healthy weight and not using hormone replacement therapy. And alcohol consumption looks like another breast cancer risk factor that's under women's control, she added. Health.com: 5 simple ways to cut your breast cancer risk

"We found that recent alcohol consumption was very relevant in terms of determining breast cancer risk, so reducing alcohol consumption or eliminating it probably is going to impact upon a woman's future risk of the disease," Newcomb said. "This is something that you can do today to reduce your future risk." Health.com: 3 ways breast cancer can screw up your sex life