Why some women go back to their abusers

(CNN) -- A middle-of-the-night fight, a surprise pullout from the Grammy Awards, leaked photos, a police investigation -- new pieces of the puzzle of the alleged assault of pop singer Rihanna by her boyfriend Chris Brown have been emerging since early February. 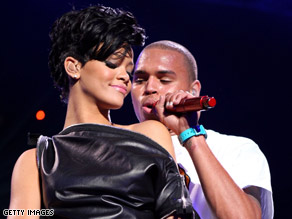 Singers Rihanna and Chris Brown, shown performing in December, are rumored to be back together.

Then, nearly three weeks after the alleged battery, the couple was reportedly together again. The reconciliation was reported just days before Brown's arraignment, which is expected Thursday in Los Angeles, California. Update: Chris Brown charged with two felonies

Brown, 19, has issued an apology for "what transpired" but neither he nor Rihanna, who just turned 21, has directly addressed the allegations.

Many would ask why anyone would return to an abusive partner after leaving, but therapists who treat both abusers and victims say it's common.

The effect is like a "pendulum of pain," said Steven Stosny, counselor and founder of the anger and violence management program CompassionPower, which treats people convicted of abuse in the home.

After a violent incident, there is often a "honeymoon period" during which the abuser may apologize profusely, give the victim gifts and persuade the victim to stay, experts say. But when that period is over, the abuser may once again become violent. Blog: The tangles of domestic abuse

The reasons for returning to an abusive partner may relate to the days of early humans, who had to fend for themselves in the wild. The powerful psychological mechanisms that lead people to stay in abusive relationships may have developed for survival reasons, Stosny said.

"To leave an attachment relationship -- a relationship where there's an emotional bond -- meant certain death by starvation or saber-tooth tiger," he said.

Abuse happens in both low-income and high-income couples, said Joanna Snawder, who counsels students and community members at the Metropolitan State College of Denver in Colorado. A wealthy woman who has never worked may not want to change her lifestyle, while a poor woman may be financially dependent on her boyfriend or husband.

Regardless, women may not want to break off an abusive relationship because they are afraid to be independent, don't know how to take care of themselves or don't want to face shame from friends and family, she said.

Sometimes the abuser can get his partner to stay with him through manipulation, for instance, telling a woman that he will kill himself if she leaves him, said Mark Crawford, a clinical psychologist based in Roswell, Georgia. Crawford has seen many women stay in relationships because they couldn't bear the guilt of an outcome such as this.

"There are some women who need to be needed so badly they'll put up with anything," Crawford said. "Even if the guy beats the crap out of them, they just feel that responsible for the other person."

The term "the cycle of abuse" is often used to describe how coming from an abusive family is believed to make an individual more likely to be an abuser or to stay in an abusive relationship. "Unless we do a lot of psychological work, we often repeat family structures and dynamics that seem normal to us," Snawder said.

On the other hand, some people who grow up in abusive households do not repeat the behavior they saw at home, she said.

One student Snawder advises voluntarily went back to her abusive boyfriend after having a restraining order placed against him. They are together, but the man is assaulting the young woman again.

"It's really important that a woman reach out and get support from friends, family or a counselor who can help her see that she doesn't have to go back to that relationship," she said.

Men aren't always the abusers. There are relationships in which the woman is the abuser and the man is the victim, and all of the behavioral patterns happen in reverse. For instance, the woman makes the man feel like it's his fault for being beaten, Crawford said.

"Those men just don't have the sense of self to say 'This is not acceptable,'" he said.

Stosny's celebrity clients who have been abusive to their romantic partners may have been negatively affected by their rise to fame early in life, he said. They see themselves as above others, and feel they are entitled to punch someone whenever they feel like it.

"I had one professional basketball player who sexually assaulted a girl. He really in his heart didn't believe that she didn't want to have sex with him," Stosny said.

Can there ever be a happy ending for an abusive relationship? Experts agree that it's unusual, but a relationship in which a partner has been violent can become healthy again if, and only if, the abusive person seeks counseling to change his or her mindset.

In practice, however, the victim usually just needs to move on to someone else, she said.