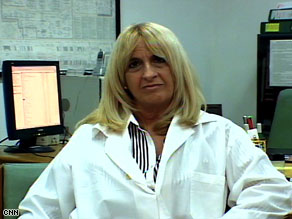 Cuban scientist Dr. Gisela Gonzalez says she and her team have created a lung cancer vaccine that extends patient's lives.

Dr. Gisela Gonzalez has spent years researching the vaccine which the Cuban government approved for the use of the general public last year.

Gonzalez and her team have worked on developing the CimaVax EGF vaccine at the Cuban Center of Molecular Immunology since the early 1990s.

She says all those years of hard work have finally paid off as trials show that Cubans with lung cancer are living a little longer after having the vaccine.

"One of my early patients was a 32-year-old man when he started taking the vaccine. I had a son that age," the scientist told CNN.

"Now he's 35. He's living and working. He visited us the other day and said he's thinking about having kids."

Gonzalez says that more than 700 patients have received the vaccine over the years, many of them in seven clinical trials in Cuba, Canada and the UK.

More than 400 advanced lung cancer patients received the Vaccine CimaVax EGF in the trials, according to the Latin American News Agency.

The trials showed that the drug extended the life of terminal patients by an average of four months, and in some cases several years, compared with those patients who only received traditional therapies. Younger patients tended to fare better.

"It has the potential to be very important," according to Dr. Howard Burris, director of drug development at the Sarah Cannon Research Institute in Nashville, Tennessee.

He said the results were comparable to those being produced by two other lung cancer vaccines, GVAX and BLP 25, being developed in the United States.

"Larger trials will show there are subsets that it's very good for and for others it's not relevant," he said.

CimaVax EGF does not prevent or cure lung cancer. It is a therapeutic vaccine which stimulates the patient's body to make an antibody against the epidermal growth factor (EGF), which is a key driver causing lung cancer cells to grow.

It is used in conjunction with chemotherapy and radiation therapy which reduce the size of the initial tumor.

"With this kind of product, maybe cancer, advanced cancer, can be treated like any other chronic disease like diabetes," Dr. Gonzalez said during a recent tour of her modern laboratory in Havana.

Medical services, even the most costly, are provided free of charge in communist Cuba. CimaVax EGF is now part of routine treatment for advanced lung cancer patients.

Experts say that success is due in large part to a focus on preventative medicine and a very local approach to health that includes thousands of neighborhood physicians.

Cuba has also developed a formidable biotechnology industry championed by Fidel Castro as early as the 1980s. Doctors here developed vaccines for Meningitis B and Hepatitis B which are now being used in a number of countries. Medical tourism is also on the rise, attracting paying patients from abroad.

Dr. Gonzalez said CimaVax EGF has sparked a lot of interest internationally. She has advised foreign patients interested in the vaccine to seek approval from their national regulatory agencies to use it in their home country. She said two patients, one from Australia and one from Argentina, have already succeeded in doing so.

Simon wrote that she was undergoing radiation treatment and would have to wait four weeks after that before starting the vaccine.

"The vaccine's bona fides will be checked out before I start. And I will be using it under scientific conditions so that we can judge its efficacy. So let's see - I am happy to...become the resident guinea pig," she added.

The Cuban team is now starting a clinical trial in Malaysia and hopes to begin others in China, India and Peru.

Dr. Burris said an article last year by the Cuban doctors in the Journal of Clinical Oncology made a big splash in the scientific community, injecting new enthusiasm into U.S. research on the topic.

"It's hard to get an antibody response once you've had chemotherapy," he said. "So if you have a vaccine and it works even half the time, that's pretty fabulous."