Six health problems your child may inherit from you

While tucking our sons into bed the other night, I was struck by how many of their physical attributes they've inherited from my husband and me. Eleven-year-old Nate has my heart-shaped face, large eyes, and cowlicky hair, along with my husband's mouth and freckles. Six-year-old Nicky, on the other hand, has the same green eyes and dirty-blond hair that I do, but my husband's nose and chin. 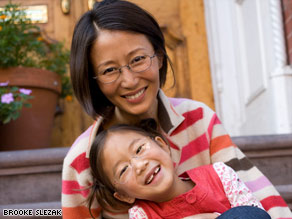 Nearsightedness, color blindness, and lazy eye are often inherited, according to a pediatric ophthalmologist.

But those aren't the only things we've passed on: Nate has acquired my propensity for headaches and hay fever, and Nicky got my husband's eczema in a bad way. Of course, many chronic conditions run in families, but family history alone doesn't guarantee that a child will develop one of them. Instead, it signals increased risk.

"Usually, it's a combination of genetics and environmental influences that triggers a condition," says Jennifer Shu, M.D., a pediatrician in Atlanta, Georgia, and coauthor of "Heading Home With Your Newborn." You can't change your kid's genes, but you can get familiar with a few of the most common health problems that affect families and learn how to protect yours. Parenting.com: From asthma to whooping cough, identify childhood illnesses with our symptom checker

Will the kids get them? Your child's view of the world could be quite similar to yours -- literally. Nearsightedness, color blindness, and lazy eye (amblyopia) are often inherited, says Stuart Dankner, M.D., a pediatric ophthalmologist in Baltimore, Maryland. If both parents are nearsighted, a child has a 25 to 50 percent chance. "Only females carry and transmit the gene for color blindness, but usually only males have the condition," Dankner explains. If the mother is a carrier of the gene, there's a 50 percent chance her son will have it.

Signs they got nabbed: If your child complains of headaches, or often squints or tears up, especially with reading, watching TV, or at the end of the school day, it's worth having her vision checked.

Children may not complain about nearsightedness until they're school-age, but it can be detected as early as age 3, says Dankner. That's when Crystal Smith's son, Cameron, began squinting to see things. "I knew there was a strong chance he'd have vision problems because my grandmother, aunts, mother, and I all wear glasses, but I didn't expect it to happen so young," says Smith, of Plainfield, New Jersey.

Lazy eye can emerge during the first year, but it can be difficult to catch unless the pediatrician screens for it. Don't worry too much if your infant's eyes cross now and then -- almost all kids' do in the first couple of months; if you notice crossing along with a difference in pupil size after that, schedule an exam. As for color blindness, you'll usually know by age 5.

What you can do: If eye problems run in your family (and actually, even if they don't), it's smart to start regular eye exams with a pediatric optometrist or ophthalmologist by age 1. This is especially important if your family history includes needing glasses at a young age or if you suspect lazy eye at any time. Early detection and correction of vision problems can help a child feel and function at her best -- and, in the case of lazy eye, which can lead to severely impaired vision if untreated, it could even save her sight.

Will the kids get it? The odds are about fifty-fifty, the same as for allergies. That makes sense given that eczema is actually a type of allergic reaction. The condition can take parents by surprise, though, especially when neither parent actually has it. "The tendency or predisposition to allergic conditions is what's inherited, not the specific allergies," says Howard Saal, M.D., director of clinical genetics at the Cincinnati Children's Hospital Medical Center in Ohio.

However, eczema does have a couple of specific triggers: cold, dry environments can bring it on, as can highly allergenic foods such as dairy and eggs, says Shu. Stress can play a role as well: when young children's parents divorced or separated, the kids experienced a threefold increased risk of eczema during the next two years, according to research from the Technical University in Munich, Germany. Parenting.com: Guide to skin and respiratory allergies

Signs they got nabbed: Eczema is pretty hard to miss. The dry, itchy skin or red, rough patches usually form on the cheeks, insides of the elbows, and backs of the knees. And when it's severe (or when the child scratches and scratches), little pus-filled sacs can develop. Of the allergic conditions, this one is most likely to make its debut first, even during infancy.

What you can do: See your doctor to confirm your suspicions and to develop a maintenance routine to help prevent more breakouts. Usually, staying on top of moisturizing (opt for one that's fragrance- and dye-free) can go far in keeping the condition in check; to ease the itching and inflammation of a flare-up, your doc may prescribe a topical steroid cream. If despite your best efforts your child scratches so much that an infection develops, antibiotics are usually in order.

Will the kids get them? These debilitating headaches are often passed on: your child has as much as a 50 percent chance of developing them if one parent gets them, and an even higher chance if both do.

Signs they got nabbed: Symptoms often include some combination of throbbing pain (usually in the front or sides of the head), nausea or vomiting, and sensitivity to light or sound. Migraines typically show up around age 8, but some kids get them much sooner; in young children especially, the head pain is often associated with motion sickness.

What you can do: Do your best to identify your child's particular triggers (it can help to keep a log of what he was doing and eating, as well as how he was generally feeling, around the time the pain began). Common ones in kids include fatigue, overexertion, changes in routine, certain foods (aged cheese and processed foods like hot dogs and lunch meats are biggies), and caffeine.

Fortunately, kids' headaches are often relieved by going to sleep or taking ibuprofen or acetaminophen. If the strategies provided by your pediatrician don't bring relief, she may suggest seeking out a pediatric neurologist, says Saal. After all, unrelenting pain can have a powerful ripple effect on nearly every aspect of your child's life. In fact, a study by the Centers for Disease Control and Prevention found that children with frequent or severe headaches that go untreated have higher levels of emotional, conduct, and peer problems than their headache-free classmates. No wonder: Being a kid is hard enough without having to deal with pain. Parenting.com: 5 common health conditions your pediatrician might miss

Will the kids get it? There's a good chance. People who suffer from IBS are more than twice as likely to have a first-degree relative with the same symptoms, according to research from the University of Sydney in Australia. "It's very common to see colicky infants whose parents have IBS or reflux," says Dan Levy, M.D., a clinical assistant professor of pediatrics at the University of Maryland School of Medicine. "They may have a lower pain threshold than other babies."

Signs they got nabbed: The classic symptoms are frequent crampy abdominal pain or alternating bouts of constipation and diarrhea. IBS usually appears during the school years, but precursors, like colic, may be apparent earlier in a child's life. "There's also a big emotional component," says Tanya Remer Altmann, M.D., author of "Mommy Calls." Flare-ups are common during challenging transitions in a child's life, such as going to school or even just attending a party he doesn't want to go to, Levy says.

What you can do: If you suspect your child has IBS, have him checked out by your pediatrician. "IBS is a diagnosis of exclusion," Altmann says. "We want to rule out the possibility that something more serious is going on, like inflammatory bowel disease." If the problem turns out to be IBS, it can usually be managed with lifestyle changes. That may mean avoiding certain foods that might be triggers, adding probiotics (the healthy bacteria found in yogurt), and/or teaching kids some stress-management techniques, such as relaxation exercises or yoga.

Will the kids get them? There's about a fifty-fifty chance they will if you or your spouse suffers; if you both have allergies, there's an even greater chance the kiddos will, too, says Saal. But don't expect them to be sensitive to the same things you are. Remember, we pass on only the susceptibility to allergies, which can manifest in myriad ways.

Signs they got nabbed: Frequent colds, sinus or ear infections, or a constantly runny, stuffy, or itchy nose can point to allergies. Same goes for itchy eyes, rashes, or hives. And wheezing or a chronic cough -- telltale signs of asthma -- may be the biggest tip-off that your child is destined to develop allergies because the two conditions so often go hand in hand. Parenting.com: Great recipes for kids (and grownups!) with food allergies

What you can do: If any of these symptoms appear -- as they often do between the ages of 3 and 5 -- tell your pediatrician. For mild cases, he may suggest medications such as antihistamines (wait for the okay before giving one) and/or prescription nose drops, which may provide ample relief; if they don't, or if your child has severe symptoms such as trouble breathing, your doctor will want to pinpoint the problem with allergy tests -- either the skin-prick or blood-test type. If needed, other medications and immunotherapy (allergy shots) are available and can bring tremendous relief.

But sometimes it's a matter of finding the right approach for your family. "I have pretty bad allergies, and a few years ago, I started noticing that my then six-year-old son had circles under his eyes and seemed tired and snuffly all the time," recalls Diane Umansky, a mom of three in New York City. "The pediatrician recommended antihistamines, but the two we tried made him really hyper and interfered with his sleep in a major way. He finally got relief after we got allergy-proof bedding covers and began vacuuming religiously." In other words, do what works! Parenting.com: Are we overmedicating our kids?

It's not just physical vulnerabilities that your child can inherit from you. Certain psychological and emotional issues can also be a family affair. In particular, there's a strong genetic component to attention deficit hyperactivity disorder, as well as to several mood and anxiety disorders, including depression, bipolar disorder, and obsessive-compulsive disorder.

While it may feel harder to reveal a history of mental health problems to your pediatrician, it's important that you do. That way, if your child develops certain warning signs, such as unusual sadness, irritability, anxiety, inattention, or a change in appetite, sleep, or ability to enjoy things, the doctor may be able to zero in on the cause -- and get your child help -- a lot sooner.

To learn more, check out:

• American Academy of Child & Adolescent Psychiatry Use the search tool to find a child and adolescent psychiatrist.

All About Eyesight and Eye Health • Eczema • Irritable Bowel Syndrome