(CNN) -- China has killed 13,000 birds in the country's far northwest to control what it called an epidemic of bird flu, state media reported Tuesday. 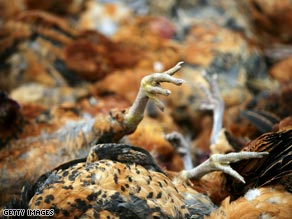 Since the end of 2003, the H5N1 virus has infected birds in over 60 countries in Africa, Asia and Europe.

Five hundred fowl that had died in the Xinjiang Uygur Autonomous Region tested positive for the H5N1 virus, according to China's Ministry of Agriculture.

In late January, China confirmed its sixth case of bird flu in a human.

The ministry said at the time that, although further human bird flu cases were possible throughout China, there wouldn't be a large-scale outbreak, state run news agency Xinhua and CCTV reported. The country also announced it was setting up a nationwide network to test for the H5N1 virus.

Following a bird flu outbreak in late January, India culled more than 4,000 birds in the remote northeastern state of Sikkim.

Health officials also detected dozens of cases of upper respiratory infection among humans, but none of the patients had any history of handling sick poultry, a government spokesperson said. Sikkim borders Nepal and China.

Since the end of 2003, the H5N1 virus has infected many species of birds in more than 60 countries in Africa, Asia and Europe.

It has not been found in birds in North or South America or the Caribbean, according to the Food and Agriculture Organization of the United Nations.

Human-to-human transmission of avian flu is rare, but the virus has passed from poultry to humans in some cases. It has killed more than 200 people since 2003. China reported its first human-to-human infection case in 2005.

Of the 34 cases confirmed to date in the country, 23 had been fatal, the World Health Organization said in late January.