Do men who frequently smoke pot have a higher risk of testicular cancer than those who do not? It's possible, according to a new study. However, the researchers say the link is currently a "hypothesis" that needs further testing. 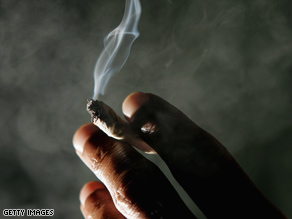 Some experts question research saying that frequent pot smokers could double the risk of having testicular cancer.

Testicular cancer is relatively rare -- a man's lifetime chance of developing the disease is about 1 in 300 (and dying of it is about 1 in 5,000). Frequent or long-term marijuana smokers could have about double the risk of nonusers, according to the report in the February 9 issue of the journal Cancer.

In the study, a team led by Dr. Janet R. Daling of the Fred Hutchinson Cancer Research Center in Seattle, Washington, interviewed 369 men between the ages of 18 and 44 from the Seattle-Puget Sound area whose testicular cancer had been diagnosed. They compared those men with 979 men who lived in the same area, but did not have cancer.

These types of studies have one important caveat -- cancer patients may be more likely to remember - or may be more honest about - past drug use than men in the general population.

Because marijuana use was more closely associated with one type of tumor, rather than testicular cancer in general, it reduces the chances that the study participants were less than honest, Daling said. "That certainly makes us feel better that the associations are true associations," she said.

Still, the results are considered preliminary and need to be confirmed with more research. "There have been studies done on testicular cancer, but ours is the first to look at marijuana," said Daling. Health.com: Dogs sniff out clues in the fight against cancer

Scientists believe that most cases of testicular cancer actually get their start in early fetal life. Having an undescended testicle - a relatively common birth defect - a key risk factor for the disease.

There has been an increase in testicular cancers in the last half of the 20th century, however, which spurred the team to examine other factors that might explain the rise. Marijuana use increased over the same period, and chronic use has been shown to affect sperm formation and fertility, they note. Health.com: Boost your mood naturally

Some experts say the association is a tenuous one, particularly because seminomas have increased 64 percent from 1973 to 1998, while nonseminoma rates rose only 24 percent.

"These researchers have an association that they've picked up on, but it's a weak association," said Steve Shoptaw, a professor in the department of family medicine and psychiatry at UCLA. "Marijuana tends to be one of those firebrand issues were people can make statements to get airtime, so I'd like to see these findings replicated."

The authors note that nonseminoma rates did go up in a couple of places in the world in recent decades. One is Norway and the other is the Netherlands, a country where cannabis use is tolerated. The next step, said Daling, is to collect tumor tissue, evaluate it for marijuana receptors, and study how those relate to tumor development. Visit CNNhealth.com: Your connection for better living

"Certainly we're going to continue forward with this," she added.

Without stronger proof, critics say the study should be taken with a grain of salt. "There's always been the thought that cannabinoids had some interaction with the reproductive systems, so maybe they're onto something. Who knows?" said Shoptaw. "But now we need to isolate the actual physiological responses."

For patients using cannabis for medicinal purposes, the improvement in quality of life may outweigh any potential risk of testicular cancer, said Shoptaw.

"The bottom line is that I would not start warning my marijuana smokers that they are going to get testicular cancer," he said. "I don't think there's enough here to go forward with that message, at least not yet."

All About Marijuana • Testicular Cancer