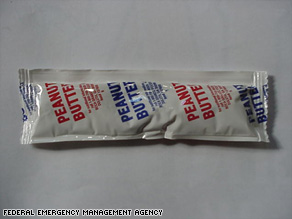 People who received the food kits should throw away the peanut butter packets, FEMA says.

"Commercial meals kits manufactured by Red Cloud Food Services Inc., under the Standing Rock label, have been provided to disaster survivors in impacted communities, and these kits may contain peanut butter which is part of the precautionary national recall underway in accordance with the U.S. Food and Drug Administration," FEMA said in a written statement.

Though the kits do not all contain the same main course, they do contain packets of peanut butter, the agency said.

"People who have received commercial meal kits are asked to inspect the kits in their possession and immediately dispose of any peanut butter packets," it said.

Jay Blanton, spokesman for Kentucky Gov. Steve Beshear, said late Wednesday: "We just received this information from FEMA. Tonight, out of an abundance of caution, we are in the process of finding alternative sources of food for people in shelters. The Kentucky National Guard is starting to notify people who've already received the (meal kits) or might be getting one."

Blanton estimated that 6,000 to 7,000 people remained in shelters, primarily in western Kentucky.

Of officials' reactions to the salmonella warning, he said: "We're pretty resilient. We've had a lot thrown in our way and we're coming through it. FEMA has been working closely with us, and they assure us this is a precautionary measure."

No one at Red Cloud Food Services, based in South Elgin, Illinois, responded immediately to e-mails.

Last month, the Food and Drug Administration linked a nationwide outbreak of salmonella poisoning that has sickened more than 500 people and may have killed eight others to peanut butter and peanut paste produced by the Peanut Corporation of America at its plant in Blakely, Georgia.

FDA said PCA could have distributed contaminated product to more than 100 companies for use as an ingredient in hundreds of products, including cookies, crackers, cereal, candy and ice cream.

In a written statement, PCA said Wednesday that federal and state regulators took part last year in "regular visits and inspections of the Blakely facility."

"Independent audit and food safety firms also conducted customary unannounced inspections of the Blakely facility in 2008," it said. "One gave the plant an overall 'superior' rating, and the other rated the plant as 'Meet or Exceeds audit expectations (Acceptable-Excellent)' ratings. Unfortunately, due to the nature of the ongoing investigations, we will not be able to comment further about the facts related to this matter at this time."