'Cello scrotum' exposed as a hoax

LONDON, England (CNN) -- A medical ailment that has worried male members of string sections across the music world for over 30 years has been exposed as a hoax. 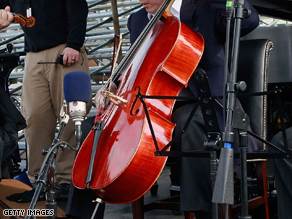 Male cellists of the world can breathe easy again.

A senior British lawmaker confessed to making up the condition known as "cello scrotum" -- which relates to chafing from the instrument -- after reading about another musically-related ailment called "guitarist's nipple" in the British Medical Journal in 1974.

Elaine Murphy, who is a member of The House of Lords and a trained doctor, came clean about the prank she devised with husband John in a letter to the BMJ published on Wednesday.

She said: "Perhaps after 34 years it's time for us to confess that we invented cello scrotum.

"Reading (Dr) Curtis's 1974 letter to the BMJ on guitar nipple, we thought it highly likely to be a spoof and decided to go one further by submitting a letter pretending to have noted a similar phenomenon in cellists, signed by the non-doctor one of us.

"Anyone who has ever watched a cello being played would realize the physical impossibility of our claim."

Murphy's confession may have been hastened by the fact that cello scrotum was referenced by a medical researcher in the BMJ late last year.

The article, entitled "A symphony of maladies," focused on health problems among musicians and contained references to such ailments as fiddler's neck, flautist's chin and cellist's chest.

Fiona Godlee, editor of the BMJ, told Britain's Independent newspaper: "It seems the BMJ has been deliciously hoaxed. It is wonderful it has been going all these years and no one realized.

"We frown on misconduct and medical fraud is taken very seriously. But in this case I hope I am right in saying that no harm has been done."

Murphy was made a life peer in 2004 and is active on mental health and ageing issues in the House of Lords.