(CNN) -- A childhood illness that has mostly been curbed through vaccinations has killed one child and sickened four others in Minnesota, health officials said Friday. 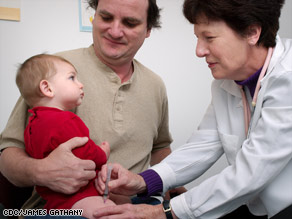 Authorities recommend that those younger than 2 years be vaccinated against 14 diseases, including Hib.

The five children were infected with a bacterial infection known as Hib: Haemophilus influenzae type b.

Three of the affected children had not received any vaccinations, including the 7-month-old who died, according to the Centers for Disease Control and Prevention.

"The situation is of concern," said Dr. Anne Schuchat, director of the National Center for Immunization and Respiratory Disease at the CDC. "It could be happening elsewhere, and of course it's tragic that one of the children actually died from a preventable disease."

Hib primarily affects infants and children under 5 years of age. The vaccine prevents pneumonia, epiglottitis (severe throat infection) and meningitis, which is an infection of the covering of the brain and spinal cord, caused by the bacteria.

One in 20 children infected with Hib dies, according to the CDC. And survivors of the disease can become deaf; 10 to 30 percent have permanent brain damage.

"Parents may not realize the importance of this vaccine," Schuchat said. "The disease is still around."

People tend to "think it's gone because it has not been seen for a while. Clearly, the bacteria is in the community in Minnesota, and babies that haven't gotten their vaccines are at risk," she said.

Before vaccines became widely used, about 20,000 Hib cases were reported each year in the country. After children began receiving the vaccinations in the early 1990s, CDC officials said, there was a 99 percent drop in cases.

A shortage of the Hib vaccine is also causing concern, officials said.

One of the two companies that produce the vaccine, Merck Inc., recalled more than a million doses in December 2007 because of contamination. The recall left a unit of Sanofi Aventis as the only vaccine supplier, creating a shortage.

Under normal circumstances, the first series of the Hib vaccine is administered to children when they are 2, 4 and 6 months old. A booster shot is administered between a child's 12th and 15th month.

Because of the vaccine shortage, the CDC recommended that the primary series for infants should get priority and that older children, who have stronger immune systems, should defer the booster shot until the supply situation improved. Officials said the supply should be back to normal by this summer.

One of the infected children, a 5-month old, had not completed the three-dose series of the vaccination, and a 15-month old child had received all doses but had an immune deficiency.

The cases are not related and were in different counties, said Dr. Ruth Lynfield, Minnesota state epidemiologist.

But the shortage may be having an effect in the community.

"When there are high immunization rates, there is herd immunity," Lynfield said. "It may be that because of the shortage, that herd immunity has dropped. That first manifests in unimmunized children."

Some parents don't vaccinate their children because of claims that childhood vaccinations cause autism. Health agencies say there is no evidence linking vaccines to autism.

"For parents that are wavering about whether they need the vaccine, they need to know it's an important vaccine to protect their child from serious infection," Schuchat said.

The Minnesota cases have alarmed health officials because "this is the highest number of cases that we have had since 1992, when vaccines became widely used," Lynfield said.

All About Centers for Disease Control and Prevention