(CNN) -- Tim Kassouf lost 45 pounds, and it all started when he got really mad at his girlfriend. 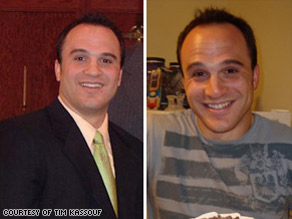 The left image shows Tim Kassouf in 2005 before he lost 45 pounds on the small changes diet.

Kassouf, a 24-year-old marketing manager in Baltimore, Maryland, was moaning to his beloved that he'd gained weight recently. He was worried. The men in his family are prone to heart attacks, and his grandfather died of one at age 29.

But instead of giving Kassouf the sympathy he expected, his girlfriend told him off.

"She said, 'You keep complaining about it but do nothing about it.' I was angry she said that, but she was totally right," Kassouf said.

Inspired, Kassouf made radical changes in his diet.

"That would last about a day," he said.

So he moved on to Plan B: small changes. That worked. Four years after he got mad at his girlfriend, Kassouf weighs 200 pounds, down from 245, mostly by focusing on a few parts of his diet without changing everything.

"What I started to realize is, it didn't have to be all or nothing," he said.

There's actually a name for what Kassouf did: It's called the "small changes approach." James Hill, director of the Center for Human Nutrition at the University of Colorado Health Sciences Center, is the father of the movement, and in this month's American Journal of Clinical Nutrition, he writes about how "small changes are more feasible to achieve and maintain than large changes."

"I was probably drinking 10 Cokes a day," he said. By switching out those Cokes for water, Kassouf saved 1,400 calories a day.

Then he worked on his snacking. He used to eat a 12-ounce bag of Doritos while watching television.

Watch how small changes can add up »

"The show would be over, and the bag would be empty," he said.

Now, he takes a handful out of the bag and puts it on a plate, and that's all he eats, saving 1,350 calories a day.

Kassouf said he lost about 5 pounds just by making the Coke and Doritos changes and then lost 15 more by cutting down on sweets and switching from white flour to wheat flour. Exercising helped him shed 25 more pounds.

Hill said it's tough to say exactly how many calories you have to cut to lose a pound, but he encourages people to think of it this way: By eating 100 fewer calories each day, you can avoid the weight gain that comes with getting older.

Most people gain a pound or two a year, he said, which can really add up. A svelte 130-pound 18-year-old could turn into an overweight 170-pound 38-year-old. iReport.com: Planning to lose weight in '09? Tell us about it

Here are five ways to cut 100 calories out of your diet each day. Doing any one of them could keep you from gaining that typical pound or two a year. The first three tips are from from Kim Gorman, a registered dietitian with the University of Colorado's Center for Human Nutrition. The fourth one is from Starbucks, and the last one is from Hill.

Let's say you have milk with your cereal and then a glass of milk some other time during the day. Drinking 1 percent milk instead of whole milk saves you 100 calories.

New: half a bagel

Give the other half of your bagel to a friend, and you'll save 100 calories. Depending on the size of the bagel, you could save even more.

New: chocolate yogurt or a Popsicle

Swap out the ice cream for the yogurt, and you're consuming 100 fewer calories. You'll save nearly that much if you have a Popsicle instead of the ice cream.

4. Old: latte made with whole milk

New: latte made with skim milk

Order a nonfat latte instead of a regular latte, and you'll save 90 calories.

Walk a mile every day, and you'll burn about 100 calories. Twenty minutes is an estimate of how long it takes to walk a mile; some people are slower, and others are faster. For all you pedometer wearers out there, a mile is about 2,000 steps.

It took Kassouf several years to lose 45 pounds doing the "small changes approach," but he said it's been worth the wait, because he's more likely to keep the pounds off than if he'd made big changes.

By the way, Kassouf is no longer with that girlfriend who called him a complainer, but he's still grateful to her for making him snap to it and come up with a plan for losing weight.

All About Diet and Nutrition • Health and Fitness