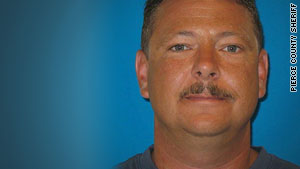 Seattle, Washington (CNN) -- A Pierce County, Washington, sheriff's deputy wounded a week ago in a shooting at a domestic dispute died Monday after he was removed from life-support systems, a sheriff's department spokesman said.

Mundell, 44, is the sixth police officer in the Seattle area to die in the line of duty over the past three months.

"We are all worn out," Troyer said.

Mundell and his partner, Sgt. Nick Hausner, responded to a domestic dispute between two brothers on December 21, authorities said. As the deputies entered the residence, police said, one of the brothers, David. E. Crable, opened fire, wounding both officers, authorities said.

According to court documents, Crable had a long history of "terrorizing" family members and violent behavior.

Critically wounded, Mundell returned fire, killing Crable, police said. Both deputies were rushed to area hospitals. Hausner was hospitalized but has been released; Mundell's wounds were severe. He was placed on life support with little hope of recovery, police said.

"The odds were always against him," Troyer said.

Mundell, a nine-year veteran, leaves a wife and two children, a 16-year-old and a 10-year-old, according to a sheriff's department release.

Since October 31, eight police officers or deputies have been shot in the area with six dying in or after the attacks.

On Halloween night, Seattle police officer Timothy Brenton was fatally shot while sitting in his patrol car. Brenton, 39, was reviewing paperwork from a traffic stop when someone fired into his patrol car. An officer Brenton was training was also wounded in the shooting.

A suspect in that case, Christopher Monfort, was arrested and charged with Brenton's shooting and an earlier arson attack that destroyed four police vehicles. He has pleaded not guilty

On November 29, four officers from Lakewood, Washington, were killed in an ambush-style shooting at a coffee shop.

The suspect in that attack, Maurice Clemmons, was shot and killed by police after a two-day manhunt. Police said he intentionally targeted the officers after a series of run-ins with authorities.

Troyer said Mundell will be honored next month in a ceremony at the Tacoma Dome, the same location where several thousand people this month attended a funeral for the the slain Lakewood officers.

"Though his life was cut far too short by this act of violence, his memory will live on in the many people he protected and served," Washington Gov. Christine Gregoire said in a statement. "I stand with law enforcement from across the state as we honor this fallen hero."