Official: Dad warned U.S. of son but 'no suggestion' of terrorist act 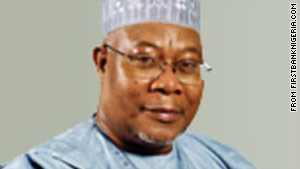 An official denies that Umaru AbdulMutallab said his son might be on a suicide mission.
STORY HIGHLIGHTS

Washington (CNN) -- When the father of suspected terrorist Umar Farouk AbdulMutallab visited the U.S. embassy in Nigeria in November, he told officials he believed his son was under the influence of religious extremists and had traveled from London, England, to Yemen, a senior administration official said Monday.

Revealing new details, the official also denied the father told officials his son might be on a suicide mission:

"There was no suggestion he was about to carry out a terrorist act," the official said.

A suspect in the foiled Christmas Day terror attack, Umar Farouk AbdulMutallab, is being held for allegedly trying to blow up a flight carrying 300 passengers that was about to land in the United States.

This official says the father, Umaru AbdulMutallab, came to the embassy in Abuja, Nigeria, on November 19.

"He was concerned about his son's safety and whereabouts and wondered if the U.S. government could help," the official said. "The father said he was in Yemen," this official said. "His son had gone from London to Yemen."

The official noted that this information was based on what the father said but has not been corroborated.

The next day, November 20, the U.S. embassy in Abuja sent what is called a "Visas Viper cable" to the State Department detailing the father's concerns, according to an official account by State Department spokesman Ian Kelley.

That information was passed on to the National Counter-Terrorism Center in Washington, which ruled that the information in the cable was "insufficient for this interagency review process to make a determination that this individual's visa should be revoked."

The secretary of state can unilaterally revoke a visa but usually does that for foreign policy and diplomatic, not national security, reasons, Kelley said.

"This has to be done in consultation with other agencies," Kelley said.

The visa was a standard multiple-entry tourist visa good for two years.

The suspect traveled previously to the U.S. on another visa, Kelley said.