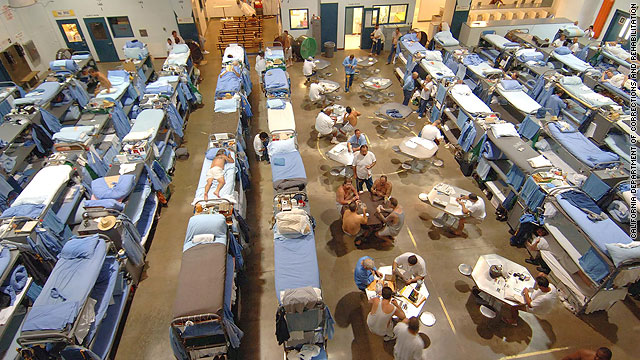 A combination of the bad economy and overcrowding has prompted California to consider the early release of tens of thosuands of inmates. The same "early release" provisions have been passed in other states since the economy began to tank.
STORY HIGHLIGHTS
RELATED TOPICS

(CNN) -- The thought of her convicted attacker getting out of prison early makes Gloria Warner feel sick.

He once threw her from a moving vehicle, she says. He also beat her until welts and bruises covered her body. He raped her, too, and she says she's been in counseling since.

Arreola could benefit from what some legislators call an "oversight" allowing violent offenders to get out early if they have a consecutive term that includes a non-violent crime. In the next few months, his case -- and the victim's objections -- will go before a judge who will decide whether to reduce Arreola's sentence.

"I don't want him out early," said Warner, 40, who was in an abusive relationship with Arreola. CNN usually does not identify victims of sexual assault, but Warner decided to reveal her name to voice her concerns with early release provisions. "Not just for me, but for any other person out there. He should have to do the time he was given."

Last week, figures from the U.S. Department of Justice indicated that in 2008 the growth of the prison population was slower than in any year since 2000. Some experts say the slowdown confirms that states are reconsidering their sentencing policies.

Oregon now allows low-risk inmates to earn reductions of up to 30 percent off their original sentence instead of 20 percent. In November, Illinois began early release of inmates who committed non-violent crimes. The state plans to release 1,000 inmates, which could save $5 million a year, said Januari Smith, an Illinois Department of Corrections spokeswoman.

"We have been very thorough in selecting offenders," Smith said.

Colorado loosened its corrections policies this year by letting non-violent offenders earn 12 days off their sentence for each month of good behavior. Previously, the limit was 10 days. Inmates who break the rules in prison -- even once -- are not eligible, according a spokesperson from the Colorado Department of Corrections.

In Mississippi, a state with one of the highest incarceration levels, officials abandoned a 180-day cap on the amount of time an inmate's sentence can be shortened. This year, a panel of federal judges ordered California to reduce its prison population by 40,000 because of overcrowding. Governor Schwarzenegger proposed releasing 27,000 inmates.

It is often controversial to pass laws that shorten inmates' sentences. Such a move seemed impossible at the height of tough-on-crime sentiment in the 1980s and 1990s.

"It's a big shift, and I think it's coming about because states and counties are having problems with finances," said Doris MacKenzie, a criminologist who specializes in sentencing policy at Pennsylvania State University. "All of the sudden they are thinking: 'Do we really need to lock up so many for such a long period of time?'

Most early release provisions apply to "low-risk" and "non-violent" inmates. This usually excludes sex offenders and murderers, among others. Officials say inmates released early usually were incarcerated for drug offenses or property crimes.

Some studies have shown that early release can work as an incentive for inmates to lead more productive, crime-free lives. In Kentucky, where the legislature passed an early release provision in spring 2008, the state saw a 3 percent re-offense rate among 8,000 inmates who were allowed out of prison early, said J. Michael Brown, secretary of the Justice and Public Safety Cabinet in Kentucky. In comparison, the recidivism rate of all offenders in Kentucky is about 35 percent.

"If you look at it from the evidence perspective, it's clear that this particular population didn't even come close to posing a greater risk," Browne said. "Those fears were generally unfounded."

The early release provisions will save Kentucky about $21.4 million. In November, the Kentucky Supreme Court backed the Legislature's decision to release inmates early after the bill ignited fury from advocacy groups and district attorneys, who sued the state.

An unprecedented prisoner population growth during the last three decades has burdened many corrections systems in the United States. In 2007, a Pew Charitable Trusts study found, state spending on corrections soared to $49 billion a year, up from $11 billion 20 years before. Prison costs are the top expense in some states, sometimes higher than the amount spent on education.

"For all the money spent on corrections today, there hasn't been a clear and convincing return for public safety," said Adam Gelb, director of the Pew Public Safety Performance Project. The project helps states adopt data-driven policies on corrections that are tough on crime without being so tough on taxpayers," he said.

Scott Burns, executive director of the National District Attorneys Association, said letting out low-risk offenders can be done without jeopardizing public safety if they are supervised correctly.

In hard-hit Oregon, where Filemon Arreola remains in prison, state officials estimate releasing inmates early will save about $6 million. Legislators say it is mostly low-risk offenders who can earn more time off their sentences.

But district attorneys, crime victims groups and The Oregonian newspaper have found that some violent criminals are being considered for early release. Several district attorney's offices say they've seen them come up routinely for consideration - although so far, only a few have actually been released.

"There is the non-dollar cost," said Tara Lawrence, head of the Oregon Anti-Crime Alliance, "which is the cost of victims having to relive this all over again."