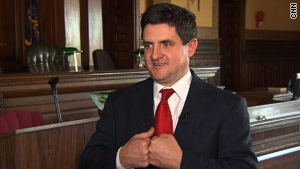 Shenandoah, Pennsylvania (CNN) -- The Pennsylvania prosecutor who failed to secure felony convictions against two teens in the beating death of a Mexican immigrant says he thought his case was "compromised" from the start.

Like many residents in the small, tight-knit eastern Pennsylvanian community of Shenandoah, Schuylkill County District Attorney James Goodman knew that an officer investigating the death of Luis Ramirez was in a relationship with the mother of one the teens involved.

Goodman also believed the investigation and evidence hadn't been handled as it should have been.

"They didn't interview the perpetrators, the boys. In fact, not only did they not interview them, they picked them up, gave them rides, helped them concoct stories, brought them back and told the boys what to say," Goodman told CNN.

The son of Shenandoah Police Lt. William Moyer also played on the same football team as the teens who were involved in the July 2008 street brawl, according to court documents.

Read excerpt from "Latino in America"

Early on, Goodman says his office reached out to the U.S. Attorney's Office with his concerns. Their investigation led to a federal indictment alleging that the teens, Brandon Piekarsky and Derrick Donchak, participated in a scheme to obstruct the investigation with the help of Moyer, Shenandoah Police Chief Matthew Nestor and Police Officer Jason Hayes, who was dating Piekarsky's mother.

Moyer, Nestor and Hayes pleaded not guilty in U.S. District Court in Scranton on Tuesday. Moyer and Hayes were released; Nestor is being held under a magistrate's order, his lawyer, Patrick M. Rogan said.

"The situation is very tragic in many ways and too many families and I'm not in any way taking the attention away from what happened to the Ramirez family," Rogan said. "But I believe that after a full airing of the case and the situation that my client will be fully exonerated."

Piekarsky and Donchak are also charged with a federal hate crime for fatally beating Ramirez allegedly because of his race.

The two are serving prison sentences after a Schuylkill County jury found them guilty in May of misdemeanor simple assault in Ramirez's death.

They were acquitted of felony charges of ethnic intimidation, a hate crime according to Pennsylvania law, and hindering apprehension.

Piekarsky, who was accused of delivering the fatal kick to Ramirez's head while he was on the ground, also was found not guilty of third-degree homicide.

"We knew there were problems with the evidence, with what the police did, with the reports that were generated," he said. "We knew our case was compromised and we knew we didn't have the strongest case going forward and that's why we entertained the plea deal."

The plea deal never panned out, but Goodman says he does not fault the jury for reaching its verdict.

"With the evidence, the police, what they did, we don't get to pick our evidence either and you've got to play the hand you're dealt," he said. "We respect their verdict and now the federal system has spoken and we'll see what happens there."

The federal indictment alleges that, shortly after the July 12, 2008 fight, Piekarsky went with Hayes and Moyer to the scene of the assault and told them about it.

After talking with them, the indictment says Piekarsky went to Donchak's home and made an agreement with Donchak and others, including two of the alleged participants "to give a false account of the assault on L.R. [Luiz Ramirez] to authorities in official statements," the indictment says.

Prior to leaving the home, the young men "created a false version of events to be incorporated in official police reports which omitted references to Brandon Piekarsky kicking L.R. and to the racial motivation for the assault," the indictment alleges.

Moyer is accused of instructing the teens to dispose of their shoes; he is also accused of mischaracterizing witness accounts to minimize Piekarsky's role. Hayes and Nestor are accused of creating false and misleading investigative reports, among other allegations, according to the indictment.

Piekarsky's relationship with the officers and rumors of a cover-up have been circulating among the community ever since Ramirez died after two days on life support. Ramirez, a 25-year-old father of two, was living with the mother of his children, a lifelong resident of Shenandoah. He was walking her sister home the night of July 12 when he encountered Piekarsky, Donchak and several other members of the Shenandoah High School football team, who were leaving a local festival.

Prosecutors alleged that the teens baited Ramirez into the initial confrontation after a night of drinking, hurling racial epithets at the undocumented Mexican immigrant.

After the fight broke up, witnesses said Ramirez came back at the teens. They beat him so severely that, according to medical testimony, brain tissue oozed out of his skull during surgery at a hospital.

Ramirez's fiancee, Crystal Dillman, said the indictments bring a measure of hope that justice will finally be served.

"We prayed for this day. And it finally happened. It was a gift from God, a Christmas present from God. It was a long-time coming but it was definitely worth the wait."