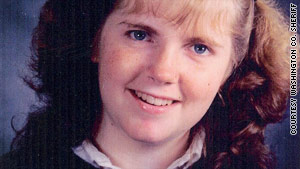 Angela Marie Girdner was 16 when she was reported missing in 1983.

(CNN) -- The remains of an Oregon teenager missing for more than 25 years were recently identified by authorities, and police are looking into whether she might have been a victim of Gary Ridgway, known as the "Green River Killer."

Police believe Ridgway could be responsible for the death of Angela Marie Girdner because her body was found within a mile of the remains of two other women that Ridgway admitted killing, the county sheriff's office said. Those bodies were found in Washington County, Oregon, near Portland. The bodies of Ridgway's other 46 victims were found in the Seattle, Washington, area.

The most prolific known serial killer in U.S. history, Ridgway is serving 48 consecutive life sentences. He has denied involvement in Girdner's death, as well as that of Tammie Liles, whose remains were found near Girdner's.

Girdner was 16 when she was reported missing by her parents in May 1983, authorities said. She was a straight-A student at her Catholic high school "until she met the wrong people," they said.

Girdner rode a bus from her home in Portland to Beaverton to school, and her parents believe she met people on the bus line "who turned her life upside down with drugs and eventually prostitution."

The last time Girdner's parents heard from her was in July 1983, police said: "She called and told her mother that she was OK, but did not say where she was at that time."

Girdner was killed sometime between that phone call and early 1985. Her skeletal remains were found April 22, 1985, in a wooded area of Tualatin, Oregon. It was one of two bodies found by people walking in the area.

The bodies, however, were unidentified for years. "Both bodies were badly decomposed and there were only traces of clothing discovered with them," the sheriff's statement said.

In June 1985, two months after the remains of Girdner and Liles were found, two other sets of skeletal remains were found within a mile of where theirs were.

"Detectives recognized the similarities with the Seattle area's Green River killings that were predominant in the news at the time," the sheriff's statement said. They contacted the Green River Task Force at the King County, Washington, Sheriff's Office, and the bodies were eventually identified as those of Shirley Shirell and Denise Bush. Both women were known Seattle prostitutes, authorities said, and both had been reported missing.

After realizing the bones did not belong to a Clackamas County case, authorities sent them back to the state medical examiner, who notified Washington County of the unidentified bones.

Sheriff's detectives asked the medical examiner's office to compare the remains once again with dental records of missing people in the area. "Based on the investigation conducted over the years, Angela's remains were compared to the dental records her dentist had submitted in 1985," in October, authorities said. "They matched."

Ridgway, now 60, was arrested in 2001 in King County for the murders of five women. He later admitted he was the "Green River Killer" and pleaded guilty to murdering 48 women, including Shirell and Bush.

"Ridgway claimed that he killed [Shirell and Bush] in King County and later transported the bodies to Oregon," Washington County authorities said. "Shirley, Denise and Tammie were all reported missing from the Seattle area. Angela was reported missing from the Portland area, and detectives have not received any information that she was in the Seattle area prior to her death."

But, the statement said, "because of the close proximity of Tammie's and Angela's remains to the remains of Shirley and Denise, the locations where their bodies were disposed of and the time frame for the murders, detectives believe that Gary Ridgway is responsible for their deaths."

Although Ridgway has denied responsibility, detectives are reviewing the cases and re-examining evidence collected over the years, police said. Anyone with information about either Girdner or Liles during 1983, 1984 and 1985 is asked to contact the Washington County Sheriff's Office.

The Green River case takes its name from a river south of Seattle where Ridgway began dumping his victims in 1982. Most of the women were prostitutes. Ridgway has said he targeted prostitutes "because I thought I could kill as many as I wanted without getting caught." He said he killed because he hated prostitutes and didn't want to pay them for sex, and claimed he killed so many women he had a hard time keeping them straight.