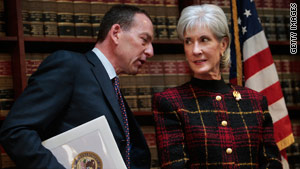 (CNN) -- Federal agents Tuesday announced they have broken up five separate rings that allegedly filed $61 million in false claims with Medicare, and charged 32 people in Miami, Florida; Detroit, Michigan; and Brooklyn, New York, with a variety of schemes to defraud the health care system for the elderly and disabled.

Thirty of those charged had been arrested as of Tuesday afternoon, federal authorities said.

The largest case, in Miami, involved a doctor and nurses who allegedly ordered home health care services that were not medically necessary.

"When someone sends fraudulent bills to Medicare, they are stealing American taxpayer dollars that are intended for those most in need," said Assistant Attorney General Lanny Breuer.

In Brooklyn, two people were charged with billing Medicare for expensive, custom-made orthotics for diabetic patients, when in fact they were merely providing inexpensive off-the-shelf footwear inserts, in some cases when they were not even medically necessary, said federal authorities.

Those cities are targeted because a Health and Human Services inspector general analysis of claim forms has found fraud is widespread in those seven locations.

"There are people masquerading as health care providers, who have no business claiming to be health care providers and that also constitutes a significant part of the fraudulent action we're uncovering," said Daniel Levinson, inspector general of the Department of Health & Human Services.