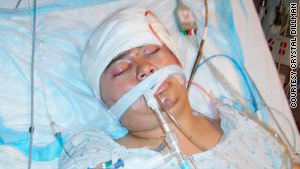 Luis Ramirez was in a coma on life support before he died two days after he was beaten.
STORY HIGHLIGHTS
RELATED TOPICS

Washington (CNN) -- Five people, including three police officers, have been indicted on charges related to the beating death of a Latino man in rural Pennsylvania in July 2008, the Justice Department said Tuesday.

Two indictments charge the five with federal hate crimes, obstruction of justice and conspiracy in what authorities are calling a racially motivated attack.

The indictments come almost six months after a Schuylkill County jury acquitted two teens of aggravated assault and one of murder in the death of Luis Ramirez.

The undocumented Mexican immigrant was beaten into a coma during a street brawl involving the teens and their friends on a residential street in Shenandoah. The incident divided the small, rural mining town along racial lines and became a flash point for racial tensions nationwide.

After the verdict, Pennsylvania Gov. Ed Rendell denounced the attack as racially motivated and called on the Justice Department to intervene.

A federal grand jury handed up the indictments last week, and they were unsealed Tuesday. The two young men, Derrick Donchak and Brandon Piekarsky, are accused of a hate crime for beating Ramirez while shouting racial epithets at him, according to the department.

If convicted of hate crime charges, Donchak and Piekarsky face a maximum penalty of life in prison. Donchak also faces a maximum of 20 years in prison if convicted of obstruction, and an additional five years on the charge of conspiring to obstruct justice.

Donchak also faces three counts of conspiring to obstruct justice and related offences. He is accused of attempting to orchestrate a coverup with members of the Shenandoah Police Department, the Justice Department said.

Shenandoah Police Chief Matthew Nestor and Lt. William Moyer and Officer Jason Hayes are charged with conspiring to obstruct justice in the Ramirez investigation. Moyer faces additional charges of witness and evidence tampering and making false statements to the FBI.

Nestor, Moyer and Hayes intentionally failed to "memorialize or record" statements made by Piekarsky about the incident, and "wrote false and misleading official reports" that "intentionally omitted information about the true nature of the assault and the investigation," the indictment said.

At the time of Ramirez's death, Hayes was dating Piekarsky's mother and Moyer's son was a high school freshman who played football with the youths involved in the attack, according to the indictment.

State prosecutors alleged that a group of teens including Donchak and Piekarsky, then 19 and 17, baited Ramirez into a confrontation after a night of drinking. Donchak and Piekarsky were walking home from a local festival when they encountered Ramirez and attacked him, "striking and kicking him while members of the group yelled racial slurs at him," the Justice Department said.

Prosecutors alleged Piekarsky delivered a fatal kick to Ramirez's head after Ramirez was knocked to the ground. A medical examiner ruled Ramirez died from blunt-force trauma to the head.

In June, an all-white Pennsylvania jury acquitted Piekarsky of third-degree murder and convicted him and Donchak of misdemeanor simple assault. The two were also found not guilty of aggravated assault, ethnic intimidation and hindering apprehension.

Donchak was convicted of corrupting minors for providing the alcohol to his friends before the fight. The two were sentenced to up to 23 months in the county jail.

"The evidence suggests that Mr. Ramirez was targeted, beaten and killed because he was Mexican," Rendell wrote. "Such lawlessness and violence hurts not only the victim of the attack, but also our towns and communities that are torn apart by such bigotry and intolerance."

Gladys Limon, an attorney representing Crystal Dillman, Ramirez's fiancee, said Dillman welcomes the indictments, but remains fearful for her safety. Dillman has moved to an undisclosed location outside Shenandoah. Her truck was vandalized, and some people have yelled racial epithets at her on the streets, the attorney said.

"She is overwhelmed and is feeling a range of emotions," Limon said. "His family has suffered a great deal in the past year."

It has been particularly hard for Ramirez's family as the holidays approach, she said.

"The children miss their father. Crystal misses having him around for the holidays," Limon said. "Crystal says this is a gift from God, that this will bring justice to Luis."

A petition calling for federal charges in the case garnered 50,000 signatures, Limon said.

A hearing in the case was scheduled for Tuesday afternoon in federal court in Wilkes-Barre, Pennsylvania.

"The FBI wants to hear from anyone who may have information regarding alleged civil rights violations or public corruption in Schuylkill County," the Justice Department said Tuesday. Those with information can contact the Allentown, Pennsylvania, FBI office.