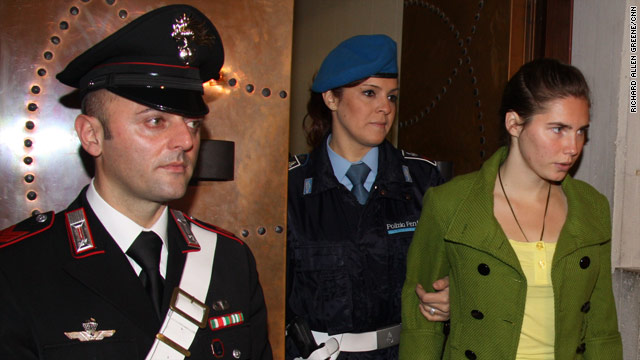 Amanda Knox is led into court in Perugia a day before sentencing.
STORY HIGHLIGHTS

Rome, Italy (CNN) -- The man convicted of killing British student Meredith Kercher has given an interview from his Italian jail cell, insisting Amanda Knox is a "sweet girl" incapable of murder.

Raffaele Sollecito, who was sentenced to 25 years for his role in Kercher's death, told an Italian newspaper that he was struggling to come to terms with the verdict and feared going "insane" in prison.

Asked if his former girlfriend Knox -- also convicted of Kercher's murder and jailed for 26 years -- was capable of killing, Sollecito told Il Messagero: "It is absurd and inadmissible. She is a very sweet girl."

Sollecito's lawyer Luca Maori, who acted as an intermediary for the newspaper, confirmed to CNN that the interview had taken place and was reported accurately.

American student Knox and Italian Sollecito were convicted last week of murdering Kercher, who was found with her throat slit in the apartment she shared with Knox in the Italian town of Perugia. Both, and another suspect found guilty in a separate trial, are appealing.

Speaking from his cell in Terni prison in central Italy, Sollecito maintained his innocence and blamed his conviction on a "media campaign."

"I was certain that the verdict would put an end to a nightmare. Instead, it didn't," he said.

Sollecito said he was no longer in love with Knox but still felt close to her. "She is also in a nightmare and a harrowing situation like mine."

He also rejected claims he and Knox had acted inappropriately by shopping for underwear after Kercher's murder -- an incident that was cited as an example of Knox's lack of emotion following her roommate's death.

"We went shopping for underwear because Amanda had everything sequestered. All of which was said was wrong," he said.

Sollecito said his religious faith was sustaining him in prison, although he was struggling to cope.

"If I didn't have faith, I would have ended my life," he said. "I should be hopeful, but it is very difficult. The world has collapsed on top of me with this verdict. It collapsed on me and Amanda.

CNN's Hada Messia in Rome contributed to this report