Suspect in Thanksgiving killings is now on most-wanted list 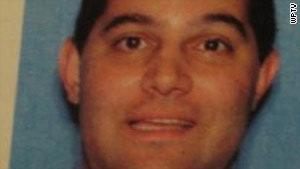 (CNN) -- A Florida man suspected of gunning down four of his family members on Thanksgiving is now on the U.S. Marshals' list of the top 15 most-wanted fugitives.

Paul M. Merhige is accused of fatally shooting his twin sisters, a 6-year-old cousin and a 79-year-old aunt at a family home in Jupiter, Florida, on Nov. 26. One of his sisters was pregnant.

A $25,000 reward has been offered for information leading to his arrest.

Along with adding Merhige, 35, to its most-wanted list, the U.S. Marshals Service has released some distinguishing characteristics about him.

Merhige might be "homosexual and/or effeminate and may frequent homosexual establishments," according to a U.S. Marshals statement. He also is known to either fake or display symptoms of obsessive compulsive disorder, such as frequent bathing and shaving, and difficulty making decisions. He also has faked or displayed symptoms of chronic fatigue syndrome.

Merhige has been taking several prescription drugs for the ailments.

"Sudden or prolonged cessation of any of his prescribed medication can result in adverse side effects, including seizures and death," according to the Marshals Service.