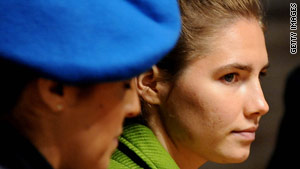 Amanda Knox looks on during a session of her trial last week at the courthouse in Perugia, Italy.
STORY HIGHLIGHTS

Perugia, Italy (CNN) -- Amanda Knox is in an Italian jail, sentenced to spend the next 26 years there for the 2007 slaying of her roommate, Meredith Kercher, while the two were exchange students in Italy.

But despite a trial lasting nearly a year, many questions about the case remain unanswered.

Reporters who have covered the crime and its aftermath for months left Perugia after the verdict last week saying they felt they knew no more about what happened in Knox and Kercher's house on November 1, 2007, than they did when Kercher's partially naked body was found the next morning.

The verdicts against Knox, an American, and her then-boyfriend Raffaele Sollecito came very early Saturday, delivered in a vaulted brick courtroom two levels below ground in this Italian university town. Sollecito was sentenced to 25 years in prison. A third suspect, Rudy Guede, was convicted earlier and sentenced to 30 years.

Knox's family insisted the verdict was unjust and vowed to appeal, and one of the senators from her home state of Washington publicly questioned the verdict minutes after it was announced.

"The prosecution did not present enough evidence for an impartial jury to conclude beyond a reasonable doubt that Ms. Knox was guilty," Sen. Maria Cantwell, a Democrat, said in a written statement. "Italian jurors were not sequestered and were allowed to view highly negative news coverage about Ms. Knox.

"Other flaws in the Italian justice system on display in this case included the harsh treatment of Ms. Knox following her arrest; negligent handling of evidence by investigators; and pending charges of misconduct against one of the prosecutors stemming from another murder trial," Cantwell said.

Kercher's family, from the United Kingdom, said they were satisfied with the verdict. Pressed on whether it was the right one, they said people should follow the evidence.

That evidence, however, is far from conclusive. The outstanding questions don't clearly favor either the defense or the prosecution; neither side seems to have presented an airtight argument.

The prosecution capped its case by showing a 23-minute video reconstruction of what they believe happened the night Kercher was sexually abused, physically battered and killed.

Based on witness testimony, cell phone and computer records and forensic evidence, the video -- which prosecutors showed separately to several CNN journalists and a New York Times reporter while the jury was deliberating Friday -- may have made a powerful impression on the jury. It looks like a video game, with lifelike 3-D buxom women and muscled men striding through the streets of the medieval town.

But the prosecution does not appear to have solid evidence placing either Knox or Sollecito at the scene of the crime. Both switched off their cell phones around 8:30 on the night Kercher was killed, and Sollecito's computer was not in use at the time of the killing.

The video suggests that Kercher was attacked with two knives, only one of which was ever found.

Prosecutors say a large kitchen knife belonging to Sollecito struck the fatal blow, arguing that Kercher's DNA was on the blade and Knox's was on the handle. The defense says the DNA samples are too small to be conclusive.

The defense also undermined the testimony of a star prosecution witness -- a neighbor who said she heard a bloodcurdling scream and the footsteps of people running from the scene. She might well have heard the scream, the defense said, but would not have been able to hear footsteps from her room.

The strongest evidence against Knox and Sollecito was the fake break-in the prosecution says they staged to cover up their role in the crime, prosecutor Giuliano Mignini seemed to feel. He spent about an hour at the beginning of his summation talking about the break-in.

But even the prosecution admits the evidence is largely circumstantial.

That said, Knox and Sollecito's behavior after the killing is hard to explain away.

Kercher died around midnight; it was more than 12 hours before Sollecito phoned police to report a break-in.

The call, which plays out at the end of the prosecution video, is full of contradictions, with Sollecito first saying there had been a robbery, but then minutes later saying nothing was stolen.

In fact, money was missing from Kercher's purse, but it was in the blood-spattered room with her. During the call, Sollecito doesn't admit to having entered the room.

When Knox was detained days after the killing, she apparently confessed, but later said her statement was made under "pressures of shock, stress and exhaustion." She also said police had struck her while she was in custody.

Knox also apparently knew the position of Kercher's body, even though she did not admit to having been in the room.

She pointed a finger at her employer, Patrick Lumumba, as the killer, but witnesses said he spent the night in the pub he ran. He was never charged with a crime, and Knox was convicted of defaming him.

Her story of where she was that night changed several times. When she was accusing Lumumba, she said she was in the house, covering her ears so as not to hear Kercher's screams.

She later said she spent the night at Sollecito's house, but he said he could not remember if she was there all night.

The jury's verdict itself raised further questions. Was its verdict unanimous? (Italian juries reach majority verdicts, not unanimous ones, with the defense winning in case of a 4-4 tie on the eight-member panel.)

And how influenced were jurors by the prosecution's video?

There will be answers to at least some of the questions the jurors left open. The judge must file their "motivation," explaining how they reached their verdict, within 90 days of their announcement. The final vote on the charges will remain secret.

There was speculation that the jury's sentences were an effort to split the difference on a case that was far from open-and-shut on either side -- and where an appeal was certain, no matter which side won.

The U.S. State Department said Monday it has no indication that Knox is not being treated fairly under Italian law.

"The Italian court system is not the same as the American court system," department spokesman Ian Kelly told reporters. "... But as I said, we haven't received any indications necessarily that Italian law was not followed."

He said the State Department will continue to "monitor this procedure as it goes forward to make sure that Amanda Knox enjoys all the rights that she's entitled to under Italian local law."

A senior State Department official, who spoke on the condition of anonymity because of the sensitive nature of the case, said the State Department is being cautious about speaking publicly about the Knox verdict while the appeal process is under way and until department lawyers have reviewed the verdict.

"She is entitled to every right and privilege afforded an American citizen," the official said. "But we are going to be very cautious about saying anything because there is an appeal process under way. ... If we weigh in, will it help? Maybe yes, maybe not."

After visiting their daughter in prison Saturday for the first time since her conviction, Knox's parents insisted this verdict was not the end of the story.

"We told her she's going to get out of there," said Edda Mellas, her mother.

CNN's Elise Labott and Jill Dougherty contributed to this report.