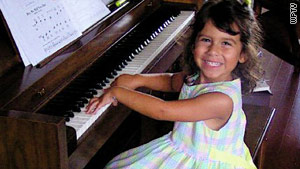 McKayla Sitton, 6, was one of the four victims shot and killed Thursday night.
STORY HIGHLIGHTS

(CNN) -- An arrest warrant has been issued for a Florida man suspected in the shooting deaths of four people, including his sisters, in the coastal town of Jupiter, authorities said Saturday.

The U.S. Marshals have joined the search for Merhige, and a $10,000 reward was offered for information leading to his arrest.

One of the victims -- Knight -- was pregnant, a police spokeswoman said Friday.

The shooting occurred about 10 p.m. Thursday.

Merhige is thought to have escaped in a blue 2007 Toyota Camry with Florida license plate number W42 7JT, police said.