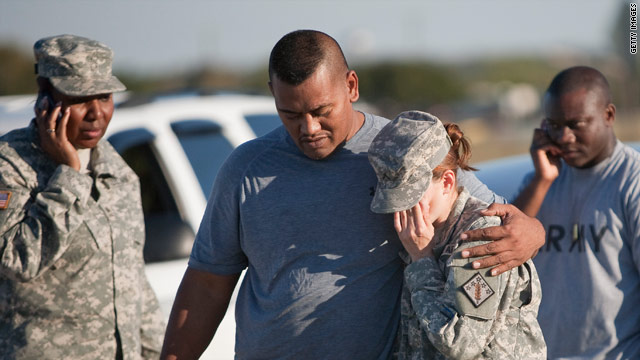 A CNN special investigation drills down on the causes and the impact of the Fort Hood shootings, at 8 p.m. ET Saturday on CNN TV.

(CNN) -- It was the kind of phone call military families dread receiving from Iraq and Afghanistan -- not from Texas.

Peggy McCarty's daughter called Thursday afternoon to say she had been wounded by a gunshot in her left shoulder. Keara Bono, 21, assured her mother that she was OK, but McCarty's heart skipped.

She knew she had much to fear when Bono, an Army specialist, arrived at Fort Hood to prepare for an early December deployment to Iraq. But McCarty never thought she would have to worry about her child getting wounded on American soil.

"I thought I was more worried about her going over to Iraq than here, just doing training in Texas. She just got there yesterday," McCarty told CNN affiliate KSHB-TV in Kansas City, Missouri.

Bono was one of 30 people hurt when a soldier opened fire on a military processing center at Fort Hood, the place where soldiers report before they head to war. They get medical and dental checkups there. They settle finances and even make out their wills.

Thursday, the center turned into a killing field, and 13 lives were abruptly cut short.

America watched in horror the news of the shootings, the deadliest ever on a military base. Some of the victims, such as Bono, were preparing to head to Iraq or Afghanistan. They were felled instead in the place they called home.

When the shouts of "Shots fired! Shots fired!" started, one soldier pushed and shoved people to get out the back of the readiness center. And run.

The soldier, who did not want to be identified, heard more screaming.

Video: Daughter shot in the back

Soldiers were dragging bodies away from the shooter. They snatched tablecloths off tables, cut up their own sage-green digital combat uniforms, even their tan undershirts, and turned them into tourniquets and pressure bandages. Everyone tried to render CPR and medical aid. Some were medical personnel. Others were simply friends helping friends.

They were soldiers, after all, and trained as combat lifesavers, though they could not have imagined having to use their skills at home.

But soldiers never abandon wounded comrades on the battlefield.

Most of the injured were awake and alert, witnesses recalled. They just weren't talking.

About a mile away at Darnall Army Medical Center, Army medic Spc. Eric Blohm waited for mass casualties. If the emergency rooms filled up, Darnall would put victims in rooms where usually babies are brought into the world.

It felt too much like Blohm's tour of Iraq.

"I'm pretty shocked and bewildered," he told CNN's Anderson Cooper. "Going to war and experiencing combat overseas and then ... to have your sense of security shattered, that's just kind of unreal."

The shooting suspect, Maj. Nidal Malik Hasan, was a psychiatrist who had an office at Darnall. Now, the hospital was taking in the doctor's alleged victims.

Sirens, installed after the September 11, 2001, attacks, sound routinely at Fort Hood during emergency drills. Pam Stephenson, the wife of a Judge Advocate General officer, was used to the blaring noise.

Early afternoon, she was about to make a quick trip to the grocery with Megan, her 5-year-old who stayed at home sick on Thursday. But then she heard the whirring of choppers overhead and warnings on the loudspeakers: "Take cover. Stay away from windows. Lock your doors."

Her husband called and told her not to leave the house. She turned on the television and learned the grim news. The gunman, she discovered, was a soldier.

"When you hear it's soldiers gone crazy -- you don't know what kind of ammunition or guns they have," she said.

She wanted to fetch Patrick, 2, stuck at day care, but the sprawling post was under lockdown. No one knew then if there were killers on the loose.

The streets were deserted. A mass of cars, waiting to get out, piled up at the gates. Loved ones waited on the other side, desperate for news of their soldiers.

Stephenson checked Facebook and read a message from a military friend serving overseas. Deployed soldiers from Fort Hood were in a panic not knowing whether their families were safe.

She checked on the soldier's wife and worried about Patrick.

Many miles away in Punta Gorda, Florida, Roxanne Johnson was chitchatting with her son, Justin, on the phone. He was a young track vehicle mechanic who was heading to Afghanistan come January.

Mother and son joked and laughed, like they always did.

And then she heard a strange noise: "Dosh, dosh, dosh."

What was that? she wondered.

"At first I thought he was just kidding around and turning up the video game, and then I said, well, maybe it's a training exercise," Johnson told CNN affiliate WINK News in Fort Myers, Florida.

She pressed the phone to her ear and listened. She heard the screams and the crying. Wow, she thought. It sounds so real.

Her son's voice was gone. She refused to hang up until she could hear Justin again.

She heard people shuffling about and muffled voices. Where was Justin? Had he been hurt? What was going on?

Hours passed before Johnson learned the fate of her son. He was one of the shooting victims. But Justin Johnson was one of the lucky ones. He underwent surgery and was recovering Thursday night.

Roxanne Johnson breathed a sigh of relief and was able finally to disconnect her phone.