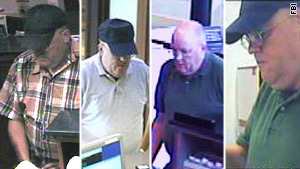 A man, thought to be between 50 and 60 years old, is wanted in a string of "calm" bank robberies, the FBI says.

Atlanta, Georgia (CNN) -- The FBI is asking for public assistance in finding a serial bank robber dubbed the "Granddad Bandit," who is believed to have struck in at least seven states.

The man, thought by authorities to be between 50 and 60 years old, is suspected in a string of nine bank robberies beginning in April in Houston, Texas, the FBI's Atlanta Field Office said in a news release.

"His robberies are described as being calm, with a deliberate attempt to not attract attention to himself," the FBI said. "The robber quietly presents a demand note to the victim teller and thereafter departs the bank without disruption to normal banking business going on around him."

Atlanta FBI seeks help
There is a $10,000 reward being offered by law enforcement in this matter.
Anyone with information should call the Atlanta FBI at (404) 679-9000.
RELATED TOPICS

A $10,000 reward is being offered by law enforcement. To offer information in the case, contact the Atlanta FBI.

In September, a man sought in at least 10 bank robberies in at least four states was arrested in Missouri. The FBI posted photos from the bank robberies on billboards, leading to the man identified as Chad Schaffner. A retired state trooper saw Schaffner in Kingdom City, Missouri, and notified authorities.