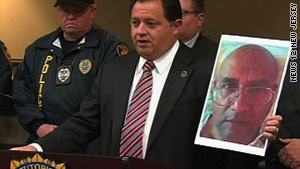 (CNN) -- The New Jersey man charged with murder in the slaying of a Roman Catholic priest was being "treated at a local hospital," the prosecutor said on Sunday.

Jose Feliciano, a 64-year-old janitor at St. Patrick's Church in Chatham Borough, allegedly stabbed Rev. Ed Hinds 32 times with a knife after the two got into an argument on Thursday, according to Morris County Prosecutor Robert Bianchi.

A spokesman for Bianchi would not explain why Feliciano was at the hospital, saying the office was "prohibited from discussing medical issues."

Feliciano is being held on $1 million bail, set by Morris County Assignment Judge B. Theodore Bonzonelis, the prosecutor's office said in a news release.

Bianchi told CNN on Saturday that the two men got into an argument "over Feliciano's continued employment."

Feliciano "beat him up first, there was also bruising on his face," the prosecutor said at a news conference on Saturday.

The prosecutor said Feliciano left Hinds, 61, on the kitchen floor of the rectory, went into the church to get a kitchen "steak or paring" knife, returned and stabbed the priest.

The news release issued by the prosecutor's office on Sunday said an argument over Feliciano's continued employment is "one of the possible motives that we are pursuing."

"Detectives are also pursuing other motives that are being developed from the many witness interviews we are conducting, as well," the Sunday news release said.