(CNN) -- California Gov. Arnold Schwarzenegger signed a new bill into law Sunday that will fine paparazzi for taking photos that invade a celebrity's right to privacy. The law also targets media outlets who purchase the photos. 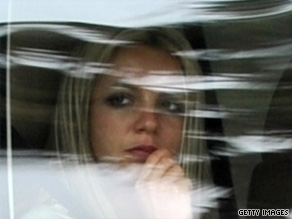 Singer Britney Spears' run-ins with paparazzi took center stage a few years ago when she took an umbrella to a photographer's SUV.

Throngs of photographers often jockey to get the perfect shot of a celebrity, but that doesn't mean it's welcomed. Britney Spears famously had enough one night, taking an umbrella to a photographer's SUV.

In 1998, Schwarzenegger himself had his car swarmed by paparazzi while he was picking up his child from school.

Jennifer Aniston received $550,000 and an apology from a photographer who used a high-powered telephoto lens to shoot her in the backyard wearing only panties.

While paparazzi may get a bad rap for their methods, celebrity columnist Ben Widdicombe said things are not always what they seem.

"A lot of times the shot you see in the magazine is actually orchestrated by the celebrity themselves," said celebrity columnist Ben Widdicombe. "Celebrities like Britney Spears, for example, are infamous in the industry for letting their assistants tell the paparazzi when they'll be leaving the gates."

Celebrity photos can be big business, especially when it comes to major milestones. Demi Moore and Ashton Kutcher reportedly pocketed $3 million from OK for their 2005 union. Eva Longoria and Tony Parker received $2 million from OK for photos of their lavish Paris, France, wedding.

The new California law makes it a crime to take and sell unauthorized photos of celebrities in "personal or familial activity." Violators face fines up to $50,000. The anti-paparazzi amendment takes effect in January.

All About Arnold Schwarzenegger • Britney Spears