Economic crisis hits property that may have sheltered Capone

(CNN) -- Al Capone's legend of bootlegging, gangland slayings and tax evasion lives on more than 60 years after the Chicago gangster's death. Now comes a footnote that is a sign of the times: foreclosure. 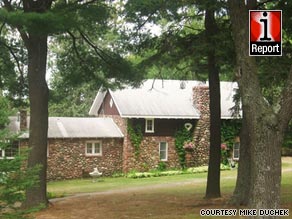 A Wisconsin lodge that may have been one of Capone's old hideouts goes on the auction block this week with a starting bid of $2.6 million.

The two-story stone lodge, tucked away on 407 acres in Couderay, Wisconsin, was owned by the Capone family in the 1920s. It will be auctioned Thursday on the steps of the Sawyer County Courthouse, three hours from Minneapolis, Minnesota, according to an ad in the Chicago Tribune.

The Tribune ad was placed in September by the Chippewa Valley Bank. The property, owned by Hideout Inc. owner Guy Houston, went into foreclosure in April 2008.

The Houston family purchased the property in the 1950s and transformed the home into a tourist spot. Visitors paid a few dollars for a walking tour of Capone's reputed hideout. iReport.com: More views of Capone's compound

The lodge is fortified with stone walls at least a foot thick and a guard tower. There is a separate facility that resembles a jail on site.

"There has been a ton of interest since we ran the article," said Joe Kinnear, vice president of Chippewa Valley Bank in Wisconsin. He added that at least 100 buyers have expressed interest.

Neither Houston nor the property owner's attorney, Todd Smith, could be reached by CNN.

Since bank officials announced a few weeks ago that Capone's hideaway was for sale, the news has traveled across the country -- and the world.

Lurigio said the Wisconsin hideout was probably just one of many retreats. Capone found respite at properties in Indiana, Michigan and Florida, too. The rural locations were ideal because Capone's rivals wouldn't travel that far to hunt him down, Lurigio said.

No one can say for certain whether Al Capone ever stayed in the Wisconsin lodge. Because he operated an illegal business, there are few written documents with clues on where he spent his time, historians say.

State University of New York at Oswego professor emeritus Luciano Iorizzo, who wrote "Al Capone: A Biography" in 2003, said he has never come across evidence that Capone visited the Wisconsin hideout.

Jim Ferguson, vice president of the Sawyer County Historical Society, said there is no hard evidence that Capone visited the property, though some locals say they spotted Capone in their community.

More likely, Ferguson said, Capone's brother, Ralph, who was in charge of soda bottling plants, lived on the property at some time.

"It was a very nice place," said Ferguson, who visited the property several times when it was open to tourists. "There was an open staircase going up to the second floor and a second-floor balcony."

The lodge, which the owners claims has the original Capone furnishings, was cozy, he recalled. The antique furniture captured the wooded Wisconsin lifestyle, Ferguson said. Animal pelts and elk heads decorated the walls.

If Capone did indeed retreat to the Couderay property, there was plenty of game to hunt, and the lakes are famous for fishing. According to historians, the 6-foot-tall, 200-pound crime boss enjoyed outdoor sports. He was an amateur athlete who began boxing in his adolescence and battled top fighters of the time, including Lou Ordoni and Babe Lancaster.

Henry Binford, a professor of history at Northwestern University, theorizes that the hideout was a stopover in the transportation of liquor to Chicago during Prohibition. It's rumored among locals that planes from Canada that were filled with alcohol docked on the small lake.

"Being an ostensible businessman, he had a lot of channels of supply," said Binford, who points out that the lodge is located close to the Canadian border.

Capone's illegal activities caught up with him in the 1930s. His most infamous mob war, the 1929 Saint Valentine's Day Massacre in Chicago that killed seven rivals, further enticed federal agents to catch him. In 1931, he was convicted of tax evasion and sent to Alcatraz prison in California.