Suspect in Yale killing appears in court, enters no plea

(CNN) -- The suspect in the killing of Yale pharmacology graduate student Annie Le appeared in court in New Haven, Connecticut, Tuesday, but did not enter a plea, his attorney told CNN. 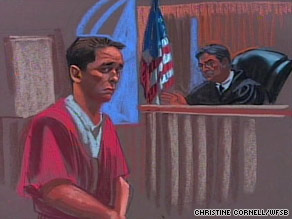 Raymond J. Clark III appears in court Tuesday in New Haven, Connecticut, where he is charged with murder.

Raymond Clark III, 24, a lab technician at Yale, is charged with murder in Le's death. Tuesday's scheduled hearing was continued until October 20.

It is standard procedure for defendants in murder cases not to enter a plea until a later stage in the case, public defender Beth Merkin told CNN. Clark eventually will plead not guilty, she said.

Clark, of Branford, Connecticut, is being held in lieu of $3 million bail.

The body of Le, 24, was found inside a wall of a Yale lab building on September 12 -- the day she was to be married. She had been strangled, the Connecticut medical examiner's office determined.

Clark is not a Yale student, but has worked as a lab technician at the university since 2004. He lived with his girlfriend, who also is a Yale lab technician, according to New Haven police.

A Yale faculty member described Clark's job as maintaining colonies for animals used in research. The lab is in the basement of the building where Le's body was found.

A motive in Le's killing was unclear, but police said they were treating the case as workplace violence.

Yale has announced a memorial service for Le on October 12. The university is also establishing a scholarship in her memory.

Le was buried in California on September 26.

"You were born in my loving embrace," said Le's mother, Vivian Van Le, reading a poem she'd written in Vietnamese to those gathered for the funeral at Holy Trinity Catholic Church in El Dorado Hills.

"The most wonderful gift that God had sent to me. ... You left life at too young an age, at the beginning of many great things. All the dreams and hopes of your future gone with you to your resting place," Vivian Van Le said, according to her son.