ATLANTA, Georgia (CNN) -- Kandi Burruss, the newest cast member of the reality show "The Real Housewives of Atlanta," was mourning the death Saturday of her fiancé, who died after a fistfight the night before. 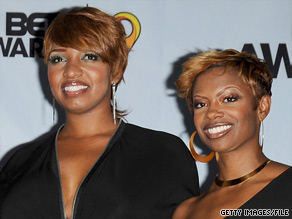 Kandi Burruss, at right with co-star NeNe Leakes, appeared at the BET Awards in June.

A spokeswoman for Burruss said the actress was "devastated" by the news.

"She has no statement to make at this time and asks for privacy," Tresa Sanders said. She said the two planned to marry, even though the relationship had ups and downs.

In late August, Burruss told WVEE Radio in Atlanta, "We're on hiatus," and she told Essence.com last month that the two were taking a break from each other.

Jewell and another man fought Friday night in the parking lot of the Atlanta strip club Body Tap, police spokesman Officer James Polite said. Jewell was taken to a hospital, where he died of blunt force trauma to the head, Polite said.

Fredrick Richardson was arrested on a charge of voluntary manslaughter after witnesses identified him and he was interviewed by police. He was treated at a hospital.

Police tentatively described the men as club managers, although Jewell claimed on Twitter that he owned the establishment. Polite said police don't know why the fight started.

Sanders said Burruss was doubly saddened because she is mourning the death of her uncle, Ralph Leslie, whose funeral is Saturday.

The reality performer posted messages about Jewell's death on Twitter.

"im just in one of those moods where i dont wanna talk, i dont wanna b held & told its gonna b ok. i just wanna cry myself 2 sleep, alone," she says.

"i could never n a million years imagine this happening. please pray for AJ's children. that's who im the most concerned 4."

"im bout 2 giv my swollen eyes sum rest now. i just wanted to say thanks 2 every1 for their prayers."

Burruss is a Grammy-winning singer-songwriter and former member of the 1990s R&B group Xscape.

All About Reality Shows • Atlanta