Raped at 8 and left for dead, a victim raises her voice

(CNN) -- For nearly 20 years Jennifer Schuett has held onto every memory of the night she was abducted from her bedroom, raped and left for dead. 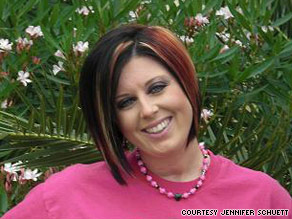 Jennifer Schuett remembers small details of the night she was abducted, raped and her throat slashed at age 8.

It was August 10, 1990. Schuett was 8 years old and lived alone with her mother in the first floor of an apartment complex in Dickinson, Texas. The bedroom windows faced the parking lot.

Investigators were never able to identify a suspect, but new DNA testing may change that.

CNN normally does not identify victims of sexual assaults. But Schuett wants to go public with her story-- and her name-- to increase the chances of finding and prosecuting her attacker.

"It's not about me anymore," she explained. "It's about all the little girls that go to sleep at night. I know there are so many girls out there who have been raped and hurt. You have to fight back."

For that, Schuett, 27, is relying on her voice, her memory and advances in DNA testing.

"I remember everything; I've always wanted to remember everything, so I can find the person that did this," Schuett told CNN during a phone interview. "If I had blocked this out of my memory, the investigation wouldn't have come this far. I'm a fighter."

Schuett says she was alone in her bed when a man came creeping in through the window. She remembers waking up in a stranger's arms as he carried her across a dark parking lot.

"When I opened my eyes, his face was the first thing I saw and he covered my face and mouth," she said. "He ran with me to his car. He told me he was an undercover cop and that he knew my family. He seemed calm -- not nervous, not aggressive."

After they left the parking lot, he drove her through the streets of Dickinson, Texas, pulling into a mechanic shop next to her elementary school.

"Watch the moon. The moon will change colors and that is when your mom will come to get you," she recalled him saying. "Oh, it looks like she is not coming."

Schuett said he drove her to an overgrown field next to the school and raped her.

"He had a knife to my throat and touched my face and offered me Reese's pieces," she said. "I was scared but I knew I couldn't be fast enough to get away. Cars would drive by but I couldn't get away to get help."

She believes she passed out. "I woke up to him dragging me by my ankles," she said. "I felt thorns ripping the skin off my back. I would see him turn to look at me and I would play dead."

She passed out again, and awoke at daybreak. "I remember feeling dew around me and I couldn't figure out why when I screamed I couldn't hear myself," said Schuett.

She lay naked on top of an ant hill with her throat slashed from ear to ear, and her voice box torn.

Much later, she said, "I heard children playing hide and seek. That is when one of the kids tripped over my foot," said Schuett.

She was found at 6 p.m. on a hot August day. She had been lying in the field for nearly 12 hours. She was rushed to the hospital in critical condition.

"Three days after the attack, I started giving a description. The doctors told me I would never be able to talk again, but I proved them all wrong," said Schuett. She believes she got her voice back so she could tell her story.

"I never wanted to play the victim role. I wanted to be a strong survivor," she said.

But the attack left its mark. "For the first two years, I had nightmares and was scared," she said. "But I never wanted sympathy. ... If I had given up, he would have won, and I wanted to show him: 'You didn't win.' "

Shuettt said she is now "on a manhunt."

Houston FBI Special Agent Richard Rennison is one of the lead investigators in the case, along with Dickinson police Detective Tim Cromie.

Both men were discussing the case, when Rennison received a memo from the FBI's Child Abduction Rapid Deployment (CARD) Team, saying they were looking for cold child abduction cases that could be retested for DNA evidence. The Schuett case was one of the cases selected.

Rennison, who has 10 years of experience in child abduction cases, said he has never seen a case like Schuett's.

"This is the only one that I can think of that the victim has suffered some traumatic injuries and survived," he said, "The main reason the CARD team picked this case was because she was alive. In cases of child abduction it is rare that the child is recovered alive. Frequently you recover a body and most times you never find them."

Schuett is a living witness who can help put the pieces together.

The investigators found evidence collected 19 years ago, which can be retested. It includes the underwear and pajamas Schuett was wearing, as well as a man's underwear and T-shirt, which were found in the field where Schuett was left for dead.

The clothes were tested in 1990, but the sample wasn't large enough for conclusive results. But now, modern techniques allow DNA to be isolated from a single human cell.

Once they get back the DNA results -- "any time now," Schuett said -- they will run them through the FBI's criminal database and see if they get a match.

The FBI has also offered a $10,000 reward for information that could lead to a break in the case. And last weekend Schuett appeared in "America's Most Wanted," which resulted in several leads from viewers who called in with information.

"Someone might remember something about that night," Schuett said. "Dickinson is a really small community. Everybody knows everybody. I know someone in town knows something."

All About Sexual Offenses • Kidnapping • Federal Bureau of Investigation