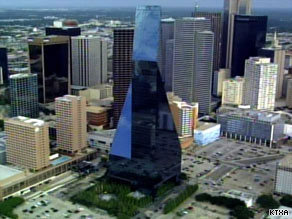 Authorities say a suspect tried to set off a bomb attached to a vehicle at the base of the Fountain Plaza tower.

Federal officials said Hosam Maher Husein Smadi, who entered the U.S. illegally and lived in Texas, tried to set off an improvised explosive device attached to a vehicle at the base of the 60-story Fountain Plaza office tower.

Counterterrorism officials arrested Smadi on Thursday before publicly disclosing a similar, but unrelated, terrorism sting arrest in Springfield, Illinois, Wednesday. A federal law enforcement official familiar with the cases said authorities feared word of the Illinois arrest could tip off the Texas suspect of an undercover sting operation.

In a criminal complaint filed with Smadi's arrest, counterterrorism officials said the suspect had been under "continuous surveillance" because of oft-stated determination to inflict damage and death against the United States, which he deemed to be an enemy of Islam.

"The identification and apprehension of this defendant, who was acting alone, is a sobering reminder that there are people among us who want to do us grave harm," said James Jacks, the top federal prosecutor in Dallas.

After casing a Wells Fargo Bank in the office tower in July, Smadi told an undercover agent he would target the facility, according to authorities. Initially Smadi told the agent he wanted to conduct the bombing on September 11, but decided to wait until Ramadan ended September 20, authorities said.

"Unbeknownst to Smadi, the FBI ensured the [vehicle-borne IED] contained only an inert/inactive explosive device, which contained no explosive materials," the Justice Department said in a written statement.

Smadi will make his first court appearance before a federal magistrate judge in Dallas on Friday.

The charge of attempting to use a weapon of mass destruction carries a potential sentence of up to life in prison and a $250,000 fine.

Justice Department officials said the Dallas case was unrelated to the similar FBI sting in Springfield, Illinois, a day earlier when FBI undercover agents foiled a plot to bomb that city's federal building.

All About Dallas (Texas) • Terrorism