(CNN) -- Texas authorities on Sunday were searching for a convicted burglar who escaped from a medical facility by rappelling off the building using a string of bedsheets, officials said. 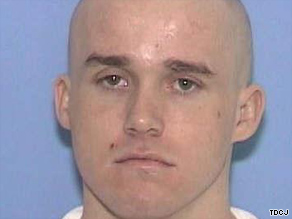 Security officers noticed there was a hole in the wall and a vent had been removed.

According to Clark, Barnes busted a hole through a wall in his room and then broke through a thick window.

He apparently tied bedsheets together, rappelled down the side of the building to a roof, and then jumped to the ground, Clark said.

Barnes was serving 35 years in prison for several felony convictions, including seven burglary charges, two escape charges and an aggravated assault charge in the Texas Panhandle area, according to a TDCJ press release.

The inmate was being housed at a prison in Midway, Texas. He was transported to the medical facility in Galveston last week after being hurt in an altercation, TDCJ said.

All About Galveston • Burglary