LOS ANGELES, California (CNN) -- Authorities are looking for art thieves who made off with a collection of Andy Warhol paintings from a private residence last week, police in Los Angeles, California, said Friday. 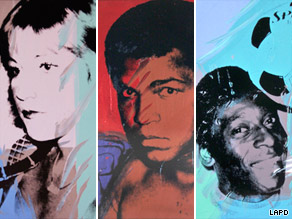 The multimillion-dollar collection had been displayed in the dining room of Richard Weisman, a Los Angeles businessman whose portait is among the missing items, police said.

The theft was discovered by one of Weisman's employees and occurred between September 2 and 3, police said.

A $1 million reward has been offered for information leading to the recovery of the art.