(CNN) -- Authorities have charged an Owosso, Michigan, man with two counts of first-degree premeditated murder in the Friday shooting deaths of an anti-abortion activist and another man, a prosecutor's office said. 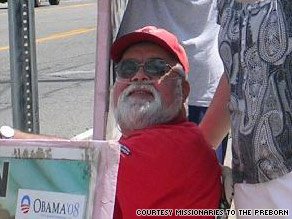 Authorities say the suspect, Harlan James Drake, was offended by anti-abortion material that the activist had displayed across from the school all week.

Authorities also have charged Drake with a felony firearm count and carrying a dangerous weapon with unlawful intent, the prosecutor's office said.

Drake also is suspected of "attempting to locate a third victim without success," the office said.

He was arraigned Friday and is being held without bail, the office said. It was not immediately known whether he had an attorney.

Pouillon, whose anti-abortion activity was well-known in the area, was protesting across the street from Owosso High School about 7:20 a.m. Friday when he was killed by several shots fired from a passing vehicle, Owosso Police Chief Michael Compeau said.

Watch Compeau talk about the incident »

Several people witnessed the shooting, and one was able to provide a license number, he said.

"At the time of his arrest, the suspect made statements that he was involved in another homicide in Shiawassee County the same day," he said.

Sheriff George Braidwood said a call had come to a 911 dispatch center about 8:17 a.m. saying that an employee at Fuoss Gravel, outside Owosso, had discovered the owner, Michael Fuoss, dead. He had been shot several times, Braidwood said.

Authorities believe that Fuoss and the suspect knew each other, Braidwood said.

According to Sara Edwards of the county prosecutor's office, authorities do not believe that Drake knew Pouillon.

Operation Save America, the anti-abortion group of which Pouillon was a member, said in a written statement that he was "well known for his love of Christ and unborn children."

The Owosso school district went into immediate lockdown after the shooting outside of the high school and remained so until the suspect was in custody, Compeau said

The high school's administration offered parents the option of picking up their children, he said. All after-school activities were canceled, he added.

All About Michigan • Abortion