Jaycee Dugard's aunt: 'This is a joyful time'

LOS ANGELES, California (CNN) -- A California woman who turned up alive 18 years after being kidnapped at age 11 is reconnecting with her family after nearly two decades apart, her aunt said Thursday. 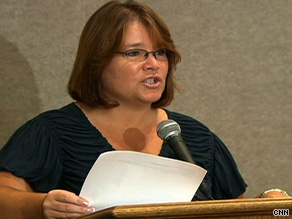 Tina Dugard speaks to the media Thursday about how her niece Jaycee is reconnecting with her family.

Police said Thursday that the man charged with abducting and raping Jaycee Lee Dugard had been accused of raping a 14-year-old in 1972, but those charges were dropped for unknown reasons.

"I think there's a good chance of that, yes," Antioch Police Lt. Leonard Orman said when asked whether he believed that other victims would be found.

Dugard is spending time in "a secluded place, reconnecting" with her mother and younger sister, said Jaycee's aunt, Tina Dugard, who spent time with them.

The two children born to her during her captivity are "clever, articulate, curious girls," she said.

"This is a joyful time for my family," she said. "Jaycee remembers all of us."

Jaycee Lee Dugard was kidnapped in 1991 from a bus stop near her home in South Lake Tahoe, California, and discovered last week. Authorities say a couple kidnapped her and raised her in a compound of tents and outbuildings in the backyard of their Antioch, California, home for 18 years.

Nancy and Phillip Garrido have been charged with a total of 29 felonies, including the rape and kidnapping of Dugard, who police say gave birth to two daughters fathered by Garrido during her captivity. The Garridos have pleaded not guilty. Philip Garrido is a registered sex offender.

Tina Dugard appeared in Los Angeles on Thursday to read a statement on behalf of her family.

"Jaycee is a remarkable young woman who has raised two beautiful daughters," she said. "They are clever, articulate, curious girls who have a bright future ahead of them."

"Although they have no formal education, they are certainly educated," she said. "Jaycee did a truly amazing job with the limited resources and education that she herself had, and we are so proud of her."

Tina Dugard said Jaycee's mother's smile is "as wide as the sea."

"Her oldest daughter is finally home," she said.

Dugard, now 29, is enjoying catching up on the years missed with her family, Tina Dugard said.

"She is especially enjoying getting to know her little sister, who was just a baby when Jaycee was taken," she said. "Not only have we laughed and cried together, but we've spent time sitting quietly, taking pleasure in each other's company."

The Dugard family statement thanked the law enforcement and social agencies involved in reconnecting them. "Their support and professionalism have been invaluable," it said.

A trust fund has been established for donations to help Dugard, the aunt said.

"It has come to my family's attention that there may be unauthorized solicitation of funds to support Jaycee and the family," she said.

The family released three photos of a young Dugard. One was taken at her grandmother's home when she was 3. A second showed her dressed as a punk rocker the Halloween before her abduction.

Tina Dugard said she snapped the third photo at the 1991 Rose Bowl Parade when she asked her niece to "make a face for me, and she did."