(CNN) -- A Georgia man allegedly slapped a toddler at a Walmart store because she wouldn't stop crying, authorities said. 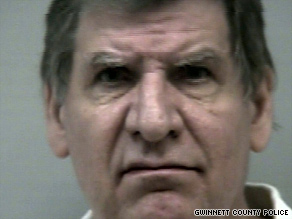 Roger Stephens, 61, was arrested Monday and charged with first-degree cruelty to children. An incident report obtained from police in Gwinnett County indicated Stephens did not know the 2-year-old girl he stands accused of hitting.

The confrontation happened shortly before noon at the Walmart in Stone Mountain, a suburb of Atlanta.

According to the arresting officer, the child's mother said her daughter was crying as they walked down one of the aisles.

The mother said a stranger later identified as Stephens approached them and said, "If you don't shut the baby up, I will shut her up for you."

Watch what the stranger said »

A few moments later, while the mother and the crying child were in another aisle, Stephens allegedly grabbed the girl and slapped her across the face.

Police said he hit her four or five times. "See, I told you I would shut her up," the suspect allegedly told the mother.

Authorities described "slight redness" to the toddler's face. Before he was arrested, Stephens apologized to the mother for striking the girl, the incident report said.

Stephens, a Stone Mountain resident, is being held by the Gwinnett County Sheriff's Department.